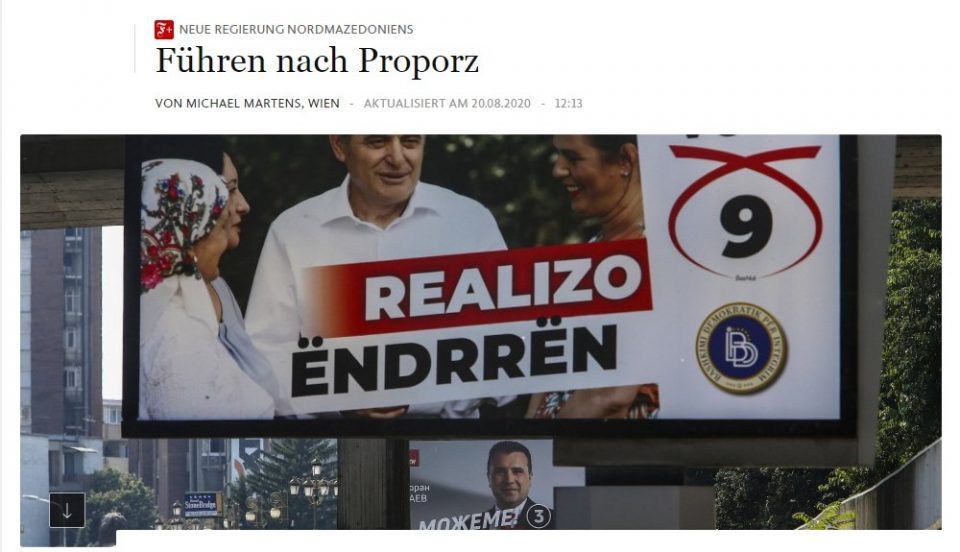 The German Frankfurter Allgemeine Zeitung writes about the new coalition being put in place in Macedonia, declaring that it moves the consensual decision making a step further from the already high level of ethnic consensus that was required. As Zoran Zaev is scheduled to get an Albanian First Deputy Prime Minister in the form of Artan Grubi, who would likely have veto power over Zaev’s decisions, FAZ writes that the new power sharing agreement in Macedonia begins to resemble Lebanon, and expresses hope that the sectarian outcome won’t be the same.

It is no longer so important what is being said, but who says it and what is his ethnic background, FAZ writes in the report by its journalist Michael Martens, who describes the situation as state capture and ethnic plunder in which the winner in the Macedonian camp (named Slavic Macedonian by FAZ) forms a coalition with Ali Ahmeti’s Albanian DUI party.

The increased competition for ethnic Albanian votes in the past elections, in which SDSM went for a share of Ahmeti’s voters, as did the Alliance of Albanians and Alternative, pushes the Albanian parties toward ever greater requests for minority rights. While Ahmeti didn’t get the promised Albanian Prime Minister, FAZ writes, he will get a symbollic Albanian PM in the last 100 days of the mandate.