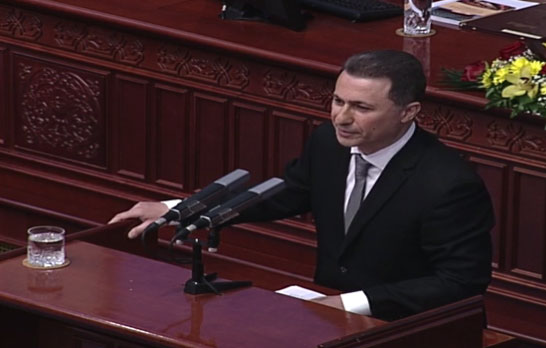 Former Prime Minister Nikola Gruevski posted a video of his speech in Parliament on the day the government of Zoran Zaev was voted.

In his comment, Gruevski writes that what he said then is being proved two years later.

VMRO-DPMNE was in power for almost 11 years. It made a lot of reforms and a big step forward in every sphere. Many problems have been solved, a lot of work has been done and many positive results have been yielded, beyond the expectations of many. Macedonia has never had a government with greater performance and progress than this in this period, Gruevski said at the parliamentary session.

However, in the last few years, we have obviously been the object of operation of external centers in order to change the government. Nevertheless, in the last elections, the people’s votes gave us the greatest confidence. But with further efforts, despite the clear victory, despite the long-standing established principle of winner with winner coalition, between the party with the highest number of votes won in the country, and the party with the largest number of votes from the Albanian community in Macedonia, with a violation of this principle, which was publicly sought for by those who violated it, as well as with further steps contrary to the Rules of Procedure, the Law and the Constitution when electing a Parliament Speaker, contrary to the will of the majority of the people, by applying the argument of power, a new majority was established, and soon a new government. Unprincipled, by force and undemocratic. VMRO-DPMNE and the coalition “For Better Macedonia” did everything that is in our power until the moment that it was not clear that by going further Macedonia and its citizens would have much more damage than benefit. Again we put personal and party interests above state interests again, said.

According to him, the main reason for the foreign operation was precisely their policy regarding the name.

The main reason for this external operation was our policy regarding the search for a fair solution to the name issue, which we did not get, and as a result we have not yet received the deserved invitation for NATO membership and EU accession negotiations, which were and will remain a strategic goal of VMRO-DPMNE. However, in addition to this strategic goal, a strategic goal is a fair solution, not an imposed solution that will diminish us as a nation, and as a state. A different approach is expected from the new majority on this issue. Time will show who was right, adds Gruevski.