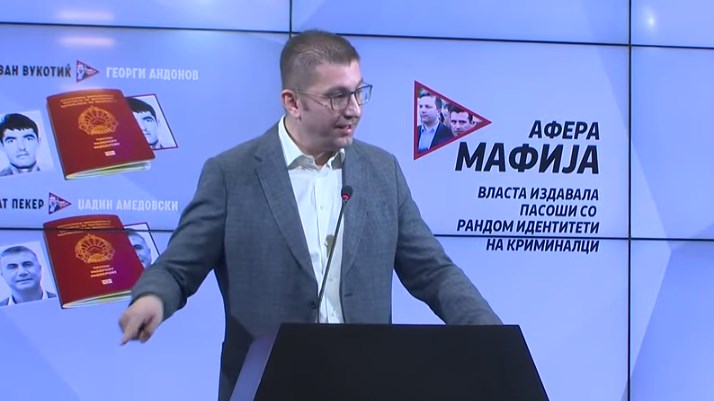 VMRO-DPMNE leader Hristijan Mickoski visited Friday the Regional Chamber of Commerce in Bitola, where he gave a statement and answered several reporters’ questions, including the question what he expects from Zoran Zaev’s visit to Madrid, Brussels and Athens and what are the benefits of the Republic of Macedonia from the visits.

Mickoski emphasized that he expects absolutely nothing from those meetings, no change in relation to the international path of the Republic of Macedonia, because the image of the policy of the Government in the Republic of Macedonia cannot be changed with visits, because the country unfortunately abounds with crime and corruption in the past few years.

The crime and corruption happening in Macedonia cannot be erased from the memory of the European Union as easily as Zoran Zaev has imagined. Those moves with the hand on the heart may have touched someone in Macedonia, but certainly won’t there. In fact, I was surprised by his statement in bad English in Athens where he said that Bulgaria had 35 chances to block Macedonia. How then do you lie to the Macedonian people that they will ever be part of the European family, if you give up on that yourself?, said Mickoski.

Mickoski added that such an attitude by the Government of the Republic of Macedonia is undignified and humiliating, because if that is the way Macedonia should court Bulgaria, then it is absolutely beyond common sense. If Zoran Zaev thinks that Macedonia can be blocked 35 times by Bulgaria on the road to the EU, then the country should look for another alternative, and stop hitting its against the wall.

I am ashamed to be part of this political swamp in which I have as a direct opponent this man who in any way harms the Republic of Macedonia and instead of fighting to change it, he elaborates on the possibilities in which Bulgaria could blocks Macedonia. It is extremely humiliating for the Macedonian people, Mickoski said.