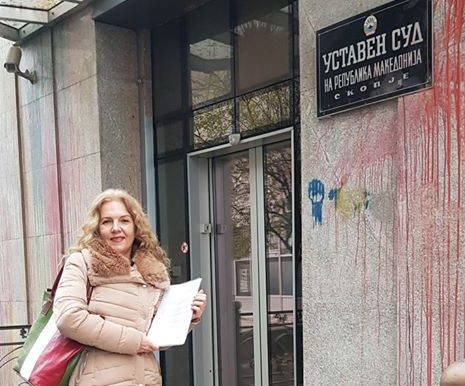 Law professor Tanja Karakamiseva, who is the Macedonian representative in the Venice Commission, published the English language version of her initiative to re-examine the Law on the use of Languages. The Venice Commission already found that the law has serious violations and is inapplicable. But the outgoing Prime Minister Zoran Zaev, pressed by the need to win Albanian votes, said he will keep in place the law that turns Macedonia into a fully bilingual Macedonian – Albanian country.

Karakamiseva’s initiative was submitted to the Constitutional Court, which has already received several other challenges to the same law, including from the main opposition VMRO-DPMNE party. The English version was distributed to the Venice Commission and to diplomatic missions in Macedonia, and it cites all the violations of the Constitution and the international law contained in the bilingualism law.

The law on the use of languages was adopted bearing a European flag, despite the fact that there is no EU law on the language policies, which represents misuse of the European flag for partisan and political interest of the government… The Law on the use of languages neither coordinates certain area with the EU law, nor is this law part of the country’s obligations towards the EU. There is no EU directive on languages, or any other EU legal act that would serve as a legal source for this law… The submitter of the law has justified the use of the European flag and the shortened procedure for its implementation by calling on full implementation of the Ohrid Framework Agreement , which is another manipulation, having in mind the fact that the Law on the use of languages goes beyond the solutions offered by the Ohrid Framework Agreement, Karakamiseva writes in her challenge to the law.

Most importantly, Karakamiseva cites the constitutional clause that the Macedonian is the official language of Macedonia, while languages spoken by at least 20 percent of the population in a given municipality is also in local official use. The law violates this provision and mandates the official use of the Albanian language throughout the whole of Macedonia, and in central Government institutions as well as municipal ones.

Article 6, paragraph 1 of the contested law imposes an obligation on all state and other bodies, organizations with public authority, legal entities…. to provide use, communication and procedures in a language spoken by at least 20% of citizens which promotes that language as an official language on the entire territory of the state, everywhere and in every institution, without paying attention to the discrepancies with the Article 7 (Amendment V), paragraph 1,2 and 6 of the Constitution, Karakamiseva writes.

Another objection, also picked up by the Venice Commission, is that the law is unclear on what exactly constitutes a public institution which would now have to use the Albanian language in official communication.

The question arises whether this “state bodies” also refers to the faculties, universities, secondary and primary schools, kindergartens, health centers, health clinics, cultural institutions, social institutions, chambers of commerce, public enterprises and various other committees, boards, bodies, organizations and similarly, in which, under the contested law, there is an obligation for use of the Albanian language, Karakamiseva warns in her challenge to the law.

Since the vote did not take place, Zaev does not get a “grace period” of 90 days