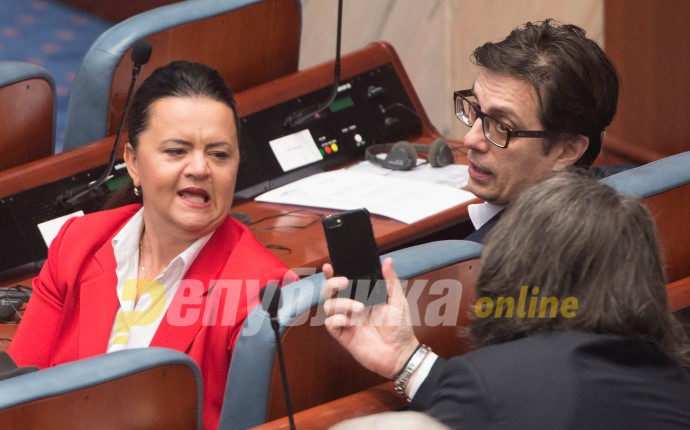 Deputy Parliament Speaker Frosina Remenski, who is charged in the secondary Racket scandal, was defensive and nervous when confronted with a journalist today. Remenski was in the Skopje courthouse to inspect the evidence against her.

I went to the bank, huh huh, Remenski, who is supposed to be in house arrest, testily told the journalist.

She is charged with using her position as a top SDSM party official to help her close friend Bojan Jovanovski – Boki 13 extort at least a million EUR from two businessmen. Boki 13 was promising the businessman that he will let them in on lucrative real-estate development deals prepared with the help of SDSM party mayors. It’s also likely that the businessmen were pressured by Boki 13 and threatened that, if they don’t “invest”, they will face criminal charges.

Remenski was named an honorary President of the International Association – a bogus charity Boki 13 used to extort the money, allegedly for the construction of retirement homes.

While fleeing from the journalist, Remenski insisted that she has evidence for an espionage scandal which she may make public, said that the press is out to get her, claimed that the prosecution has no case and defended herself from allegations that she and her husband Jovce Remenski, who is a top Interior Ministry official, kept confidential materials at home.