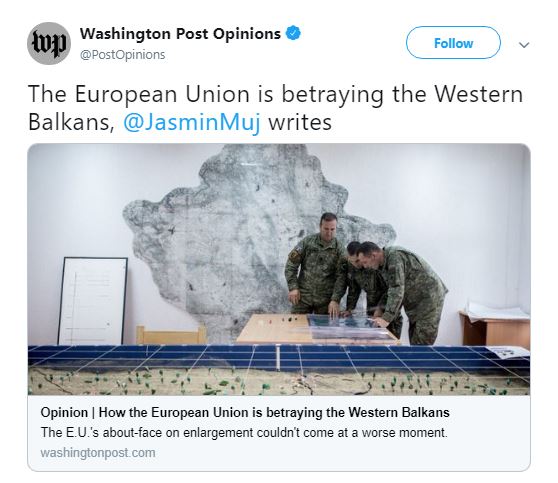 In an editorial published by the Washington Post, Bosnian left wing activist Jasmin Mujanovic warns that the European Union lied to Macedonia and will not allow opening of accession talks, despite the imposed name change. According to Mujanovic, the reason why the EU is rejecting Balkan enlargement are the significant Muslim communities in the region and the effect incorporating them in the EU will have on European politics.

The Macedonians were led to believe by European diplomats that swallowing this bitter pill — changing the name of their country — would mean an accelerated path to EU and NATO membership. The latter appears secured, but even the idea of EU membership — the big prize for most ordinary people in the region — is increasingly unlikely. More simply, the E.U. lied, and governments and peoples across the region are livid, Mujanovic writes.

The author was one of the leaders of the 2014 colored revolution in Bosnia, and shortly after was an outspoken supporter of the colored revolution in Macedonia, including through his work in Freedom House. The “revolution” resulted in the removal of the VMRO-DPMNE led Government and installed a left wing and Albanian dominated Government which moved quickly to rename Macedonia into “North Macedonia” and redefine Macedonia away from a nation state, while rewriting history books and policing speech to accommodate requests from neighboring countries. All was done in the name of joining the EU quickly, but even the first step – opening accession talks – is slipping out of reach.

The old guard in Western Europe says it is disturbed by the alarming democratic backsliding in the continent’s (south)east. But mostly its members fear the rise of a homegrown far right that points to the Balkans as precisely the kind of alien other — thanks to its large indigenous Muslim populations — that must be kept away, Mujanovic explains the reason for the cold shoulder.