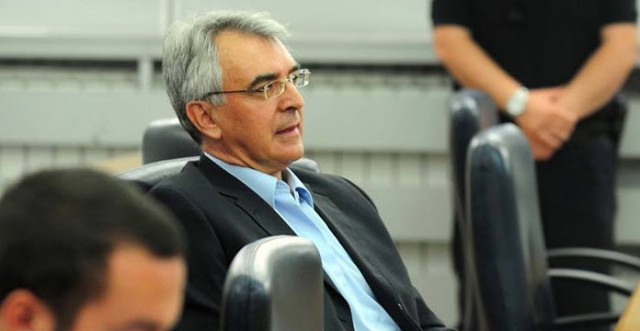 Zoran Verusevski, the former UBK intelligence agency chief who was instrumental in both the 2000 and 2015 wiretapping scandal that had far reaching consequences for Macedonia, today tried to distance himself from the more recent scandal, insisting that the final say in the on-going political crisis belonged to the SDSM party leader Zoran Zaev and his predecessor Branko Crvenkovski.

Verusevski, who was security adviser to the SDSM party, was arrested in early 2015 on the charge that he organized a rogue group of UBK officers who were abusing the surveillance systems and were sharing the tapes with the opposition party. These tapes were used by Zoran Zaev in 2015 to spark a major political crisis, just as Crvenkovski used a similar cache in 2000. Verusevski was interrogated before the court today, in a trial in which, through prosecutorial contortions, former UBK chief Saso Mijalkov is accused of ordering the wiretapping, even though Mijalkov and top officials of his own VMRO-DPMNE party were the main targets of wiretapping.

I was not providing any wiretaps or other documents. Everything that was pouring into the party was my obligation, but it was up to the leadership to develop the strategy. While party leaders, Crvenkovski and Zaev had full access to the documents. It was a strategic decision by Crvenkovski, and later by Zaev, how the files were to be used. The information and the documents didn’t end up with me but with the party, Verusevski said, carefully using passive voice about his role.

He added that he had no access to the files after he was detained, and that the files were modified in this period.

It’s a fact that the documents were being heavily modified and compromised after my detention, Verusevski acknowledged, further undermining the veracity of the tapes Zaev was presenting in 2015.

Zaev began publishing the tapes on Youtube shortly after Verusevski’s arrest and they were used to spark protests against the then ruling VMRO-DPMNE party and to legitimize the creation of the Special Prosecutor’s Office, all of which helped Zaev take over power in Macedonia. Verusevski now remains as one of his closest advisers, even as the materials they used are being debunked as false or manipulated and the Special Prosecutor’s Office is collapsing under the weight of a corruption scandal.

Besides distancing himself from the “strategic use” of the tapes, Verusevski also denied being directly involved with the two UBK officers – Gjorgi Lazarevski and Zvonko Kostovski, who were also detained and charged with the actual wiretapping and removal of the tapes from the UBK.

Gjorgi Lazarevski was one of the people who were bringing documents to the party. That person provided the materials while I was still in Italy, and continued to do so in 2014. The documents were in the party at all times and was managed by the party leader, Verusevski said.

Lazarevski, on the other hand, last year testified that he was giving the files to Verusevski, who was also tasked with selecting what to record and remove from the UBK.