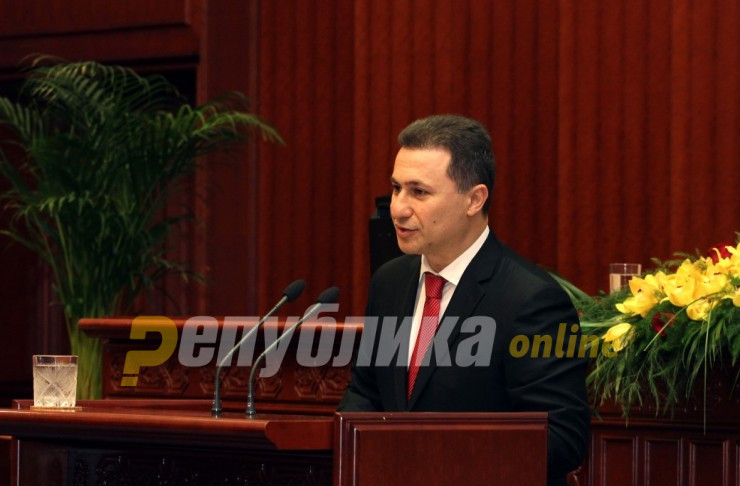 Today marks a year since Macedonian Prime Minister Nikola Gruevski was forced to flee the country for Hungary, where he obtained asylum from political persecution. In the year since, many of the things he warned about came true, while the tip of the spear in the persecution campaign against him broke irreparably.

Gruevski left Macedonia for Hungary, via Albania, Montenegro and Serbia, as an arrest warrant was issued against him in one of the many politically motivated criminal cases against him. In this particular case, the Katica Janeva led Special Prosecutor’s Office charged Gruevski with ordering the Interior Ministry to purchase an armored Mercedes to be used to transport high level visiting dignitaries. Even though the there was no mention that Gruevski appropriated the money for himself, and the vehicle was purchased was used for the likes of Theresa May and Angela Merkel and is still used, the prosecutors insisted that the fact Gruevski also got to use it on occasion constitutes an illegal gain on his part. Gruevski was sentenced to two years in prison.

On November 9th 2018 he reported from Budapest, informing the public that he has left the country after credible threats being made against his life by criminals put away during his term in office, most notably the group of Albanian terrorists who attacked Kumanovo in 2015. The group afterwards assaulted two of Gruevski’s former ministers, Mile Janakieski and Spiro Ristovski, when they were detained on different charges.

During the political crisis, Gruevski made it clear that the purpose of the campaign to drive him from office and out of the country is to both rename Macedonia and to thoroughly redefine the country, away from being the Macedonian nation state.

Less than a month before, the Parliament was forced to begin the process to rename Macedonia, despite the fact that the referendum called to approve this name change failed due to spectacularly low turnout. Nine VMRO-DPMNE members of Parliament were bribed and blackmailed, especially using charges brought by the SPO office and the organized crime unit, until they broke and agreed to vote in favor of the name change.

In 2019, media reports led to an investigation by the organized crime unit into the working of the Special Prosecutor’s Office, which eventually resulted in the arrest of Special Prosecutor Katica Janeva on charges of abuse of office and extorting millions from businessmen she was prosecuting in exchange for a more favorable treatment. The Zaev regime is still attempting to install organized crime prosecutor Vilma Ruskoska as the next Katica Janeva, while Janeva herself is trying to help Zaev continue his campaign of arrests and intimidation against the opposition giving her case files to the OJO branch of prosecutors who are also led by a Zaev loyalist. This would allow the regime to continue to hold top VMRO-DPMNE officials under pressure and govern unopposed.

Besides the asylum which Nikola Gruevski received, which indicates that, according to Hungary, Macedonia is a country that persecutes political prisoners, two other EU member states have refused extradition orders sent on the basis of SPO or OJO cases. Former intelligence officers Goran Grujevski and Nikola Boskovski, who were charged by Janeva, remain in Greece which has refused to extradite them. Meanwhile, a Swedish court refused to extradite Dejan Davidovski, who is persecuted by Vilma Ruskoska.