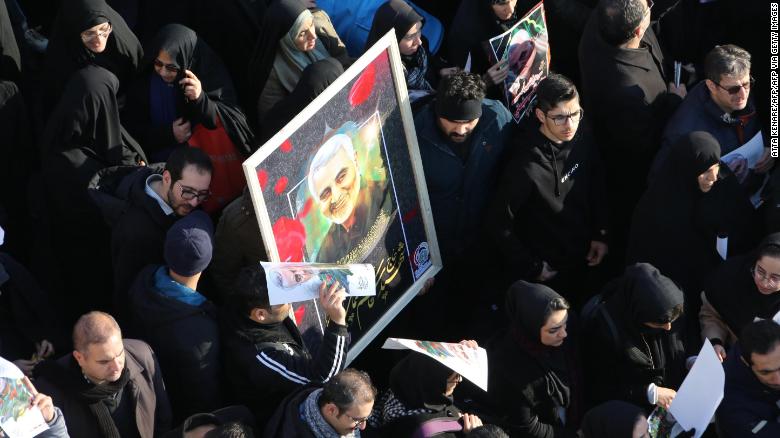 Mourners carry a picture of mourn slain Iranian military commander Qasem Soleimani, as they walk in a funeral procession organised to pay hommage to him as well as Iraqi paramilitary chief Abu Mahdi al-Muhandis and other victims of a US attack in the capital Tehran on January 6, 2020. - Mourners packed the streets of Tehran for ceremonies to pay homage to Soleimani, who spearheaded Iran's Middle East operations as commander of the Revolutionary Guards' Quds Force and was killed in a US drone strike on January 3 near Baghdad airport. (Photo by Atta KENARE / AFP) (Photo by ATTA KENARE/AFP via Getty Images)

Iran tells the United Nations it “does not seek escalation or war” following Iranian missile strikes on US forces in Iraq.

The operation was precise and targeted military objectives thus leaving no collateral damage to civilians and civilian assets in the area, Iran’s UN Ambassador Majid Takht Ravanchi says in a letter addressed to UN chief Antonio Guterres and the Security Council.

Tehran was exercising its “inherent right to self-defense” under the UN Charter and “took and concluded a measured and proportionate military response,” according to the letter.