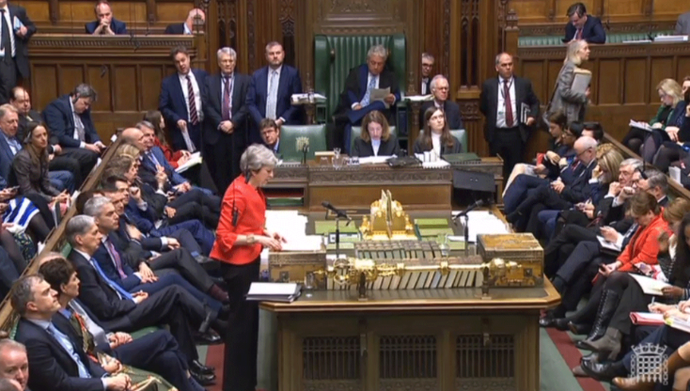 Prime Minister Theresa May has lost a crucial second vote on her Brexit deal with Brussels, in a major setback to her plan to withdraw Britain from the European Union on March 29.

May lost by 391 to 242 votes, a margin of 149, amid continued opposition from eurosceptics in her Conservative party.

Many eurosceptics said before the vote that they were not convinced by “legally binding” assurances on a protocol for the post-Brexit Irish border that May claimed to have won after last-minute talks with EU officials.

May lost the first meaningful vote on the deal by 432 to 202 votes in mid-January, a record defeat in parliament for a British government.

Votes on Britain leaving the EU without a deal and, if parliament rejects that idea, on extending the Brexit process, will go ahead as planned on Wednesday and Thursday, Prime Minister Theresa May says after losing a crucial second vote on her Brexit deal.

May told parliament following the vote that she still sees the agreement she has negotiated for Britain to leave the EU on March 29 as the “best and only deal available.”

She promised a vote on Wednesday on a motion for lawmakers to reject leaving the EU without a deal.

If as expected, lawmakers do rule out a no-deal Brexit, May said she will hold another vote on Thursday asking for parliamentary approval for her to seek an extension to the Brexit process.

The European Union regrets the outcome of the vote in the British parliament but can do “no more” to help Prime Minister Theresa May secure the ratification of the Brexit divorce deal, a spokesman for EU Council President Donald Tusk says.

“We regret the outcome of tonight’s vote and are disappointed that the UK government has been unable to ensure a majority for the Withdrawal Agreement,” the spokesman says.

“On the EU side, we have done all that is possible to help the prime minister get the deal – which she negotiated and agreed with the EU – ratified,” he adds.

“There is no more we can do. If there is a solution to the current impasse it has to be found in London,” the spokesman notes, adding that the EU is continuing preparations for a no-deal Brexit, whose likelihood has “significantly increased.”