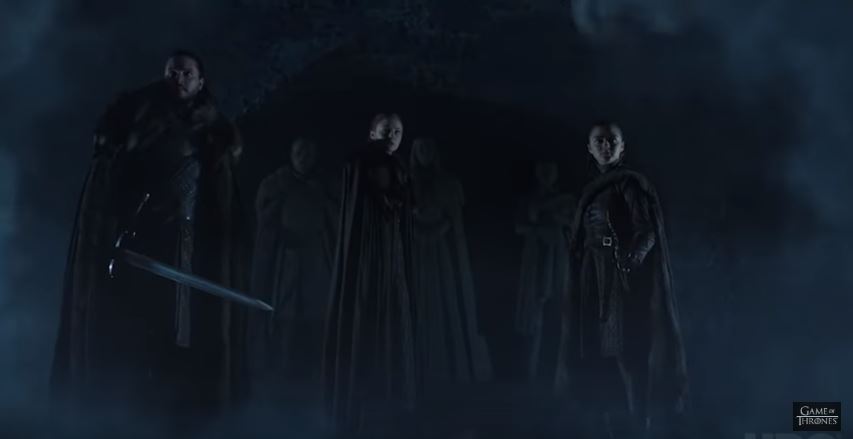 As promised HBO released the first teaser trailer for the hotly anticipated final season of Game of Thrones, on the heels of the season 3 premiere of True Detective. The one-and-a-half minute teaser appears to have been created independently of the show, and were that to be true, it would mean that we still haven’t seen much actual footage from the series’ eighth season, now announced to be premiering on April 14.

The video shows the three surviving Stark siblings – Arya, Sansa and Jon Snow – walking down a dark hallway, haunted by the memories of their dead parents, Ned and Catelyn Stark.

As they walk, they encounter statues of their parents, and later, of themselves. “You are a Stark,” Ned’s voice tells Jon. “You might not have my name, but you have my blood.”

But something interrupts the family reunion. As the trio observes the statutes, a gust of cold sneaks up behind them. The warm fiery visuals give way to icy blue tones, teasing the central conflict in what has become one of the most passionately followed television shows of all time.

The final season will consist of only six episodes, as opposed to the usual 10. But each of the episodes will be almost feature length. Miguel Sapochnik, director of fan favourite episodes such as Hardhome and Battle of the Bastards, will return, as will David Nutter, an HBO veteran who has previously helmed GoT episodes such as The Dance of Dragons and Mother’s Mercy. The finale will be directed by showrunners Dan Weiss and David Benioff.

A ’brutal’ battle sequence that took 55 nights to film has also been teased by star Peter Dinklage, who told Entertainment Weekly that it will make ‘the Battle of the Bastards look like a theme park.’

Providing more valuable information, co-executive producer Bryan Cogman also told EW that the final season “is about all of these disparate characters coming together to face a common enemy, dealing with their own past, and defining the person they want to be in the face of certain death. It’s an incredibly emotional haunting bittersweet final season and I think it honours very much what [author George R.R. Martin] set out to do — which is flipping this kind of story on its head.”