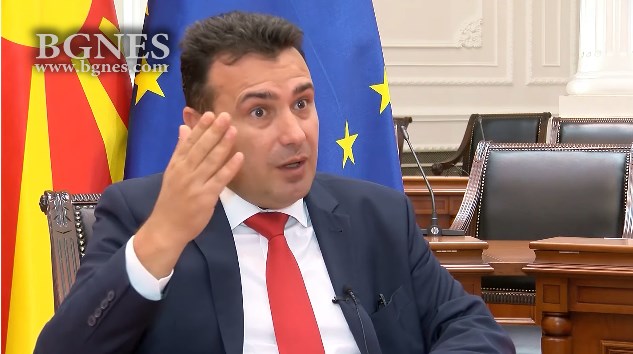 In his Telma TV interview today, Prime Minister Zoran Zaev swung back toward a more conciliatory mode toward Bulgaria. Zaev was on quite a journey, after accepting all Bulgarian demands, with vigor, in his now infamous BGNES interview three weeks ago, he then quickly morphed into a chest-thumping patriot after Bulgaria showed she’s unimpressed and still blocked Macedonia from opening EU accession talks.

After the veto, Zaev accused Bulgaria of violating his 2017 treaty with Prime Minister Borisov and called the move an “irresponsible and serious geo-strategic mistake” in an address. His delivery, in which he mangled the accent, took what was supposed to be a serious and powerful statement and turned it into material for social media spoofing.

As for his interview today was more hitting a pathetic note, without major new policy revelations.

Other countries have it easy. They are inside, where it’s warm, while we are out in the cold, Zaev said, talking about EU membership and then adding “it burns, it gnaws at me, it rips me up this veto from Bulgaria” before declaring that Borisov remains “my friend, who I call my brother”.

The opposition VMRO-DPMNE party noted Zaev’s frequent mood swings, and referred to the interview as a new “fake patriotic edition of Zaev”.

All that lacked in the interview was melancholy music to capture the mood. The journalist, from a TV station that recently censored the opposition leader, did not even try to push back against Zaev this evening, and the public was deprived answers it needs to hear. Among them, whether it’s true that while he was in the opposition, Zoran Zaev promised Borisov that he will meet all his demands? Is Zaev a blackmailed Prime Minister? Did Macedonia have a Bulgarian occupation or administration? What language is spoken in Strumica, and what in Petric? Is there a Macedonian minority in Bulgaria? Why can’t Zaev tell the difference between a shared and a common history? And why wasn’t he asked about the scandal erupting today?, VMRO-DPMNE said in its press release.

Zaev did discuss the issue of Bulgarian occupation during the Second World War, which he referred to as “administration” in his BGNES interview prompting a major revolt in his own SDSM party, not to mention in the wider public, but he was obfuscating on the issue during the interview.

If we are building friendship, and that was the point in that part of my interview, speaking through the prism of words of friendship, or European words if you will, that is why you can’t make the whole of Bulgaria out to be fascist. I know that my people is very aware of this. The point of my interview, the goal which I achieved, was a statement of friendship without hurting anyone at home, and in no way hurt our feelings. I did not speak about administration in the country, I spoke about Bulgarian administration. Very naturally reactions happen, that is freedom and we fought for that freedom, Zaev said, taking the audience on the scenic route without saying much.