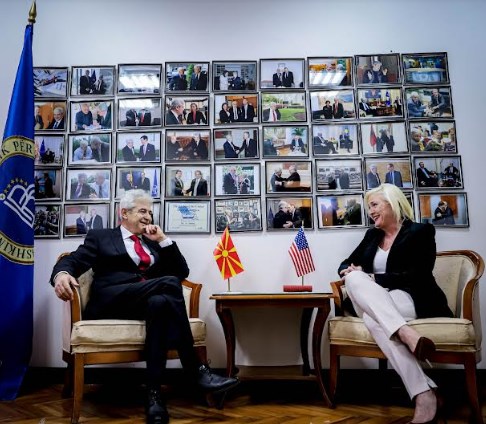 US Ambassador to Macedonia Angela Aggeler met with DUI party leader Ali Ahmeti on a day of high drama, after she announced that a team from the United States is in Macedonia to look into introducing new sanctions against active corrupt politicians. Aggeler said that her high priority will be to see serious fight against corruption in Macedonia, adding that she is dismayed with the miserable ranking of the judiciary in the country in public polls, even after he US poured millions into educating the majority of judges and prosecutors.

DUI, whose officials are notoriously exempt from any kind of legal scrutiny, be it for the war crimes they committed during the 2001 war or for subsequent high level corruption, issued a diplomatic statement after the meeting. In it, Ahmeti says that he discussed the DUI proposal for vetting in the judiciary – a process that would determine whether judges and prosecutors are fit for their roles.

In an interview with Sitel TV, Ambassador Aggeler again expressed her surprise in the way the new Special Prosecutor was appointed. Islam Abazi comes from Ali Ahmeti’s village and has few other qualifications for the job. The post he wants to assume was created under strong US pressure, during the Colored Revolution, but the term of its first office holder, Katica Janeva, ended in disaster as she was sentenced for racketeering in a move that greatly contributed to the low rating of the judiciary.