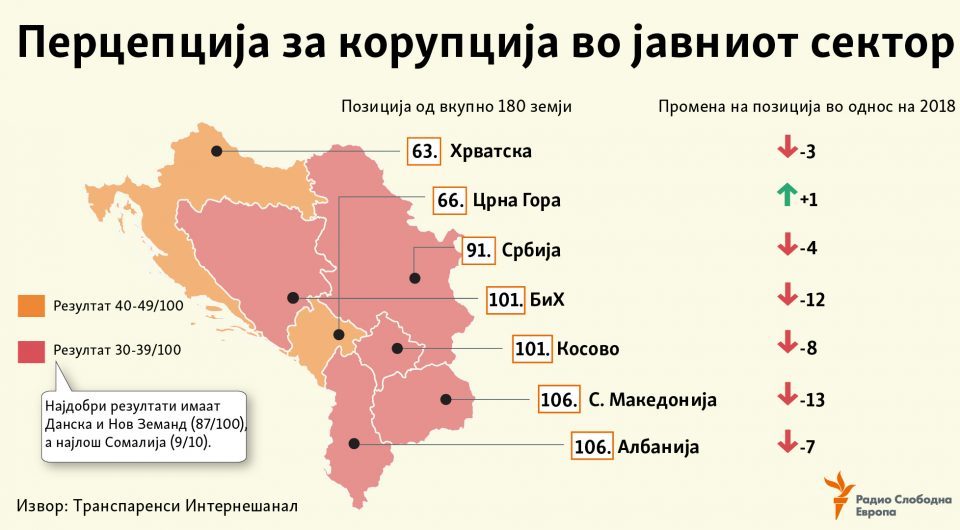 Macedonia’s drop in the global corruption perception ranking is a cause for serious concern, said Slagana Taseva, head of the Transparency International branch in Macedonia.

Most other countries in the region improved their standing or remained at the same level. Montenegro rose from the 76th to the 66th place in five years. Bulgaria remained roughly the same. Kosovo rose from the 93rd to the 101st place. Bulgaria remained at roughly the same level. But Macedonia, which had a colored revolution staged ostensibly in order to fight corruption and created a full new institution meant to prosecute politicians (which then underwent a spectacular collapse) dropped 13 places down from 2018 and is now ranked 106th, tied with the deeply troubled Albania.

This should worry us all, Taseva said.

VMRO-DPMNE President Hristijan Mickoski declared the TI ranking to be evidence that Macedonia is ran by its mafia.

Criminals run our country. The current Government alleged that there is crime and a regime in place before, but in 2015 Macedonia was ranked 66th, a full 40 places above our current ranking. Then, we ranked better than Bulgaria and Greece in corruption perception, not to mention Albania, Bosnia and Kosovo. We were better than Serbia and Croatia. Look at us now, tied for 106th place with Albania. We are falling off a cliff, Mickoski said.

Macedonia has 35 index points, and lost two since last year. Under the Transparency International model, the less points the country has, the more corrupt it is. The ranking comes as a major corruption scandal is developing in the Macedonian judiciary. Special Prosecutor Katica Janeva, who was supposed to be the symbol of fighting corruption, is herself accused of gross violation of her office and extorting tens of millions of euros from businessmen, likely for the benefit of the ruling SDSM party. New corruption scandals are opening up every day, and VMRO is announcing detailed information about the involvement of SDSM party leader and recently removed Prime Minister Zoran Zaev in marijuana dealing.

The Government, which is still ran by Zaev proxies, responded with a press release laying the blame at the courts and even the relatively toothless Anti-Corruption Commission. The Government declared that it has adopted a strategy for more transparency and a tool that allows detailed insight into budget transactions down to the smallest users. But it ignored the rising allegations of top Government level corruption which have ensnared much of Zaev’s still active cabinet.