Disastrous results of an online poll conducted by the Fakulteti.mk news site show that 83.7 percent of those who responded would happily move out of Macedonia.

Favored destinations for the would-be emigrants include Germany, Australia, Canada, various Western European countries, the United States.. Some of those polled responded with “anywhere but here”, “as far as I can” or “a country where the law applies, and there is normal healthcare and education”. 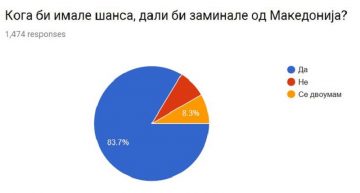 Some of the reasons for leaving Macedonia include wishing to secure a future for the children, clean air, overall disastrous experiences and “this is not a real state”.

In 10 years, high school lost a quarter of their students