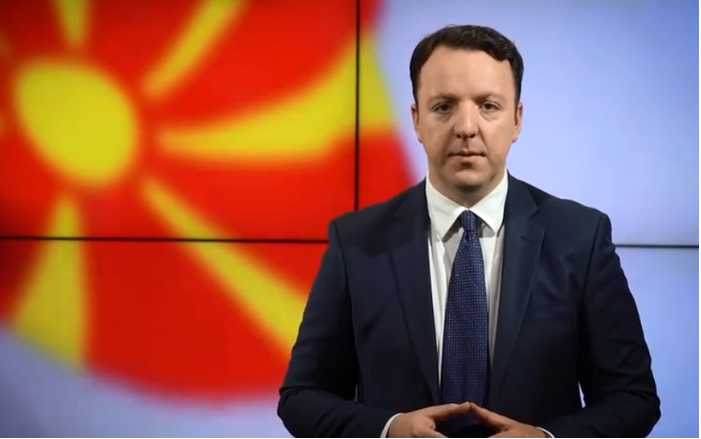 The opposition also supports Macedonia’s EU accession, but does not accept the French proposal to settle disputes with Bulgaria. In an exclusive interview with V4NA, Aleksandar Nikoloski, vice chair of the VMRO DPMNE, said that it was unacceptable for the country to have to amend its constitution in order to start accession negotiations with Brussels.

EU should return to the Copenhagen criteria

There has been a national consensus on EU accession ever since the creation of an independent Macedonia. Since 1991, the most prominent political parties have shared the same views on European and Euro-Atlantic integration, Aleksandar Nikoloski stressed in an exclusive interview with V4NA. According to the vice chair of the VMRO DPMNE party, there is not much difference of opinion on this issue between the key political organisations in the Balkan country. However, by accepting the French proposal to settle disputes with Bulgaria, the current Skopje government agreed to conditions that no other country which previously applied to join has ever accepted. The French proposal is aimed to remove the Bulgarian veto blocking accession talks. As part of the solution, Skopje must amend the country’s constitution and grant more rights to the Bulgarian minority.

The Copenhagen criteria are the set of conditions set by the European Union as a prerequisite for the opening of accession negotiations for countries wishing to join the bloc. These conditions should not be part of bilateral discussions between neighbouring countries, that is, they should not be made part of the integration process, Mr Nikoloski said in the interview. But this is exactly what Macedonia is facing, and the Bulgarian-Macedonian dispute is hampering the accession process.

The opposition does not want to amend the constitution

It is crucial for Macedonia to start accession negotiations with Brussels as soon as possible, without any further conditions imposed on the country, and no demands should be made which are not part of the Copenhagen criteria, the opposition politician pointed out.

“I think Macedonia should start its accession negotiations with the European Union without changing its own constitution. No other country which has already joined the EU was asked to do so,” he said.

Macedonia applied for EU membership on 22 March 2004. The European Commission gave a favourable opinion on 9 November 2005 and the country was granted candidate status by the European Council in December 2005. The EC first recommended accession negotiations to be started with Macedonia in October 2009.

“Back then we were in the same position as Croatia. Now, however, we can see that Croatia is not only member of the European Union, but it is also to become part of the Schengen area. In contrast, Macedonia has not even started accession negotiations. VMRO DPMNE only asks the EU to respect its own documents, especially the Copenhagen criteria,” Mr Nikoloski told V4NA.
Fight against organised crime and corruption should gain priority

In response to the question whether his country would give up on its European integration efforts if Brussels imposed additional conditions, the opposition politician said that this process must be managed wisely. The key issues for the state in the accession process are to fight organised crime and corruption and to strive to reinforce the rule of law, he pointed out. Regretfully, this is not visible in the work of the government in Skopje at the moment, Mr Nikoloski remarked, adding that this is precisely one of the biggest problems in the EU integration.

“If there were systemic improvements in these areas, Macedonia’s positions would be much better not only in relation to the Bulgarians, but also in the accession process as a whole,” Aleksandar Nikoloski highlighted.
The Balkan country cannot change its constitution under the current circumstances and conditions, the opposition leader noted. Guarantees are needed that the Macedonians can preserve their identity, culture and history, he stressed.

Macedonians are not Bulgarians

“The goals pursued by the Bulgarians are not favourable to the Macedonians, and the Bulgarians do not want us to cooperate as neighbours and coexist sharing European values. Unfortunately, they have completely different goals. They want to prove that the people living here are actually Bulgarians who speak some sort of Bulgarian dialect,” Aleksandar Nikoloski explained.
This is not true, Macedonians are not Bulgarians, the politician added.

Speaking about the Open Balkan initiative, Aleksandar Nikoloski pointed out that not all states in the region want to join it. Only Serbia, Macedonia and Albania have joined this cooperation so far. However, if the cooperation aims to facilitate the easy movement of people and goods across borders, without people having to wait for hours to cross, the question arises as to which Serbia-Albania border crossing point this rule applies to, Aleksandar Nikoloski noted. There is no answer to this question, as Macedonia and Albania recognise Kosovo as an independent state while Serbia regards it as its own territory, he underlined.

“This is not a genuine initiative. Alex Soros, George Soros’ son, is increasingly active in the region. The only reason this initiative was launched is to reach some sort of agreement on the Kosovo issue. I only see Macedonia as a kind of buffer state in this cooperation, and to be honest, I am worried that Macedonia may become some kind of collateral loss in any proposed solution to the Kosovo problem,” the vice-president of the VMRO DPMNE added.

The Open Balkan scheme is an economic and political initiative between three countries in the region. In this cooperation, the states aspiring to become part of the European Union intend to implement EU values ​​locally, such as ensuring the free movement of goods and labour, launching student exchange programmes, sharing knowledge and experience related to EU integration, and in all other areas.