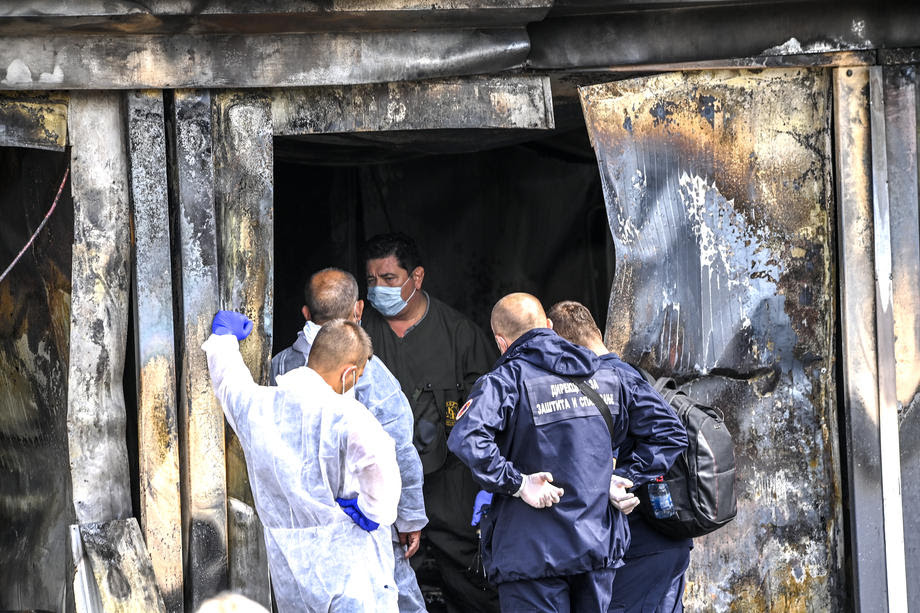 epa09456927 Forensic scientists and firefighters work at the fire site at a hospital for Covid-19 patients in Tetovo, Republic of North Macedonia, 09 September 2021. At least fourteen deaths have been reported by Ministry of Health when a fire, thought to have been triggered by oxygen cylinders that provide oxygen to patients with a more severe clinical case of Covid-19, broke at the hospital. EPA-EFE/Georgi Licovski

According to Alsat TV, the report prepared by German forensics experts after the deadly fire in the improvised Covid hospital in Tetovo points to the extension cord used to power a defibrilator as the likely source of the fire.

This was also the opinion of local investigators, who are waiting for the German report to see which direction to take with the expected charges. A major issue in the investigation is whether the charges will be focused only on the management of the hospital or toward the contractors – which included businessman Koco Angjusev, close to the ruling SDSM party. Besides the quality of the wiring, questions were raised about the insulation that was used in the container hospital, which burnt down within minutes, without leaving enough time to evacuate the patients.

Fourteen patients and their family members died in the fire that erupted as Macedonia was celebrating the 30th anniversary of its independence, on September 8th last year. Another young patient who was being resuscitated died shortly before, and the defibrilator that was used on her likely sparked the fire.