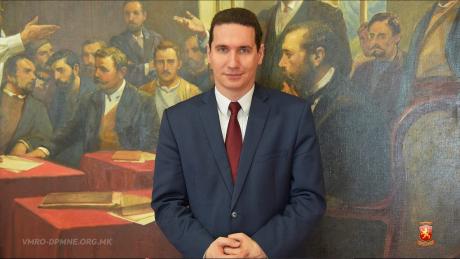 VMRO-DPMNE official Vladimir Gjorcev believes that 2019 can be a year to restore hope in Macedonia, seeing the coming presidential elections as the first step when the citizens will be able to re-assert themselves.

It is important that VMRO-DPMNE has a presidential candidate who will be able to galvanize the growing pro-opposition mood in the public aimed against Zaev and SDSM. We need a person capable of articulating the public dissatisfaction and a person who can bring new hope in Macedonia. I’m certain that Macedonia will respond to the failures the Government was met with in everything it is doing, said Gjorcev in an interview with the Press24 news site.

While the Zaev Government is reliant on votes from ethnic Albanians to keep it afloat, Gjorcev says that Albanians are realizing that nothing will come out of Zaev’s promises.

Every day more and more Albanians are disappointed with Zoran Zaev’s policies. As I said in the Parliament, he promised a lot and accomplished nothing. Many Albanians are taking to the social media networks to express their support for me and we will continue to speak out about Zaev’s false promises to the Albanians. He lied to them just like he lied to the Macedonians and to everybody else, Gjorcev says.