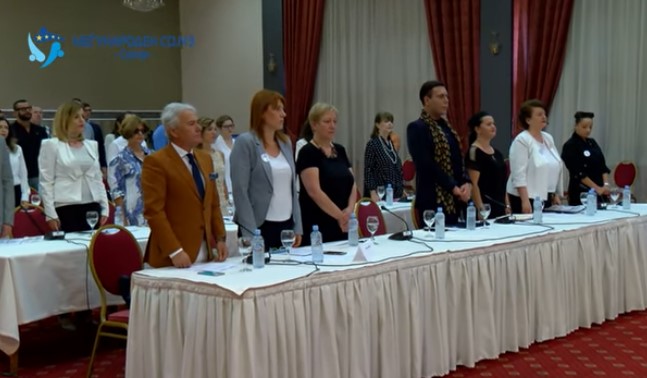 Liljana Todorovska, an elderly woman who was named as the person who collected 720.000 EUR paid to the bogus charity run by Bojan Jovanovski – Boki 13, insisted that she did not keep the money adn that it was all taken from her as soon as the collected it from the bank.

The money are believed to have been paid by the Pelister company from Bitola, owned by powerful local businessman Siljan Micevski, who entered into a deal with Boki 13 to develop subsidized retirement homes. It is widely believed that Micevski was blackmailed by more powerful structures than Boki to agree to pay him 1.4 million EUR for vaguely defined “services”, half of which was paid and quickly collected by the wheel chair bound Todorovska.

I was robbed. The money were taken from me as soon as we were out of the bank. They were people from the International Association, Todorovska told Telma, referring to the fake charity set up by Boki 13 with the help of a number of high level SDSM party officials.

The large transaction drew the attention of the financial police and the tax authorities. Boki 13 also collected more than 200.000 EUR from a construction company from Struga.

Besides the likely-hood that the money were paid to avoid criminal prosecutor from Boki 13’s close friend, Special Prosecutor Katica Janeva, it is also possible that the scheme involved getting SDSM appointed mayors of places like Bitola, Ohrid and Karpos to give Boki 13 lage plots of land, ostensibly for charity purposes, which would then be developed commercially. Prime Minister Zoran Zaev yesterday confirmed meeting with Boki 13 about the project but denied helping the criminal organization.