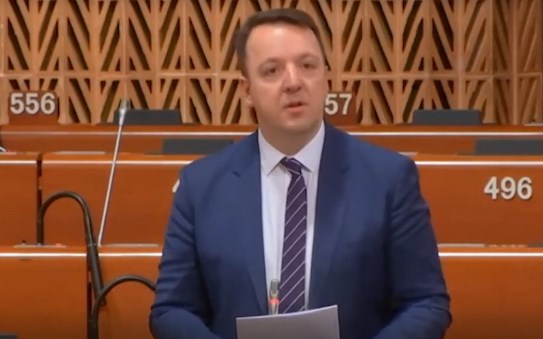 This debate will set the path of the Council of Europe for the following period. And that’s why I think as it is clear here that the solidarity and endurance of European democracies, respect for human rights, and respect for the rule of law are the best guarantees for mutual prosperity, safety, and a secure future. We also need to reaffirm unity around the common values of this organization where we are members, as well as multilateralism based on international law. We need to set an advanced agenda for the Council of Europe, putting the interest of the people first, emphasized VMRO-DPMNE vice-president Aleksandar Nikoloski in Strasbourg.

These decisions are made here in Strasbourg, Sofia refuses to implement them and thus deprives the basic human rights of the citizens of Bulgaria who declare themselves as Macedonians. This is something that should not be tolerated and something that is a bad example in the 21st century. It is also a bad example for the Council of Europe because people came here, they came to Strasbourg, they were in the European Court of Human Rights, they demanded justice, they got justice, but it is not implemented in their country.

Therefore, an effective mechanism for implementing the decisions of the European Court of Human Rights must be created and discussed at the Reykjavík summit.