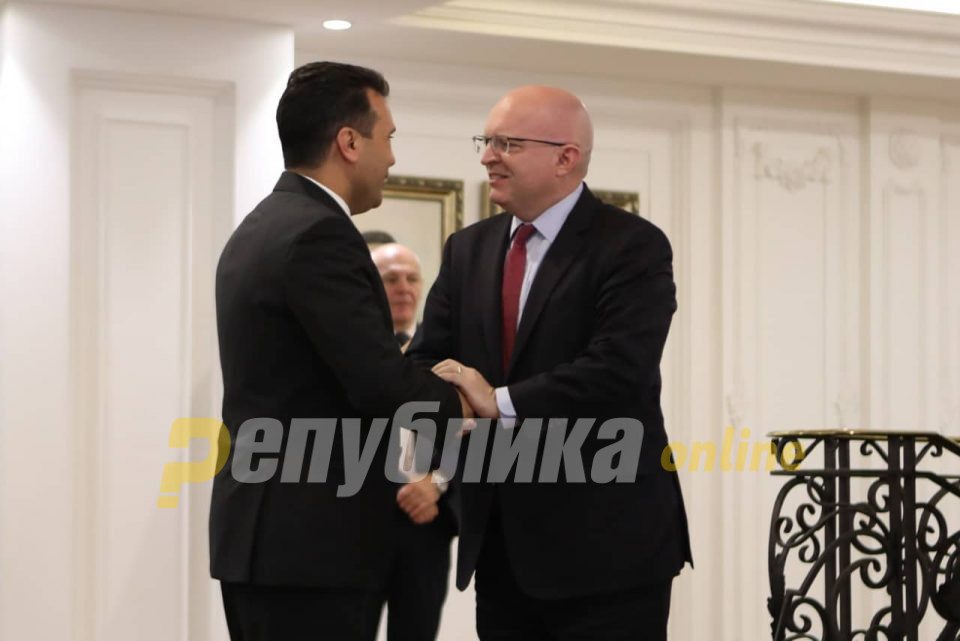 American acting Assistant Secretary of State Philip Reeker called on the opposition VMRO-DPMNE party to support Zoran Zaev’s proposed law on state prosecutors. In a joint press conference with Zaev, during which no mention was made of the criminal allegations against the still acting Special Prosecutor Katica Janeva, Reeker insisted that the law that would make the office permanent is necessary for “North Macedonia” to begin its accession talks with the European Union.

VMRO-DPMNE supports the law in principle, but rejected Zaev’s nomination of another of his loyalists, prosecutor Vilma Ruskoska, to take the place of Katica Janeva. Zaev threatened to adopt the law unilaterally, ramming it through Parliament as he did with the amendments to rename Macedonia earlier this year, unless the opposition comes around to his position by early September when Janeva’s mandate expires.

Reeker expressed his “admiration” for all that Macedonia has achieved, namely the Prespa treaty with Greece that renames the country and dangled the prospects of a “bright and positive future, and economic growth” if the country persists in the imposed name change. His visit coincided with the decision by a Committee of the US Senate to move forward with the ratification of the NATO protocol which will be sent before the full Senate.

Reeker added that he is prodding EU member states to reverse their opposition to the opening of accession talks with Macedonia this Autumn. Despite the name change, a group of countries led by France objected to the opening of accession talks in June, and some have insisted that the new law making the Special Prosecutor’s Office permanent will be a condition to open the accession talks. This was before Janeva was suspected of extorting 1.5 million EUR from businessman Jordan Orce Kamcev, and similar or smaller sums from other businessmen, threatening them with prosecution unless they pay up.

Reeker, who is a former US Ambassador to Macedonia and said that he will hold “‘North Macedonia’ in his heart”, insisted that President Trump himself wants to see old issues such as the Macedonian name issue closed so that the country can move forward.

Zaev interrupted the one critical journalists who was allowed to field a question, while Reeker received a softball question asking him about his message to the opposition VMRO-DPMNE party, and he insisted that the time for delays on the law is over and that the opposition needs to be constructive.

VMRO, which has faced dozens of politically motivated charges from the current Special Prosecutor, has revealed details about her corruption and nepotism for years, which are now being vindicated in full, and has demanded that the next Special Prosecutor provides oversight of the Government, and not only of the opposition.

Zaev said that, no matter the process in the Parliament, where criticism of the law which should be adopted with a two/thirds majority was expressed not only VMRO but the Albanian parties as well, “the country must find a way to move forward”, indicating that even if his new attempt to corall 81 votes fails, he will appoint a loyalist as a Special Prosecutor.

Reeker’s visit comes a day after European Commissioner Johannes Hahn made similar statements. Reeker met with Greek officials in Athens, but also in Solun/Thessaloniki in Aegean Macedonia/Northern Greece, a region which is the hotbed of opposition to the Prespa treaty. During his travel north he also visited Bitola, whose Mayor was reportedly one of the targets of the group centered around Katica Janeva.