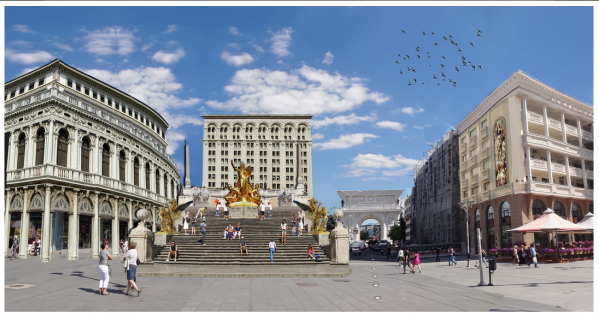 A Skopje court approved the charges filed against several VMRO-DPMNE officials over the plan to build hotels and a grand stairs monument on the main square through public private partnership. This means that the case is expected to go to trial.

It’s another case stemming from the by now debunked cache of wiretaps used by the SDSM party in its power-grab. Former Transportation Minister Mile Janakieski, who already faces half a dozen politically charges, is accused in this case as well, as are the Executive Committee member Dimitar Dimovski and Dejan Mitrevski, who heads the Aerodrom branch of VMRO-DPMNE. The charges were filed shortly after the presidential elections, when Aerodrom swung toward VMRO, showing that SDSM is losing independent minded, white collar areas of the capital.

The Amadeus Group company gained ownership over publicly owned land in a contract that included an obligation to build hotels as well as the decorative stairs on the Skopje square. The company failed to keep up its obligations, and the charges are based on the fact that Government officials did not move to seize the land from the company. Under SDSM, which rules Macedonia for almost three years now, the Transportation Ministry officials have also not acted to seize back the land, but they are not being charged.

It’s a rare case that is based on the wiretaps that is initiated by Public Prosecutor Ljubomir Joveski. Most such cases were initiated by the disgraced Special Prosecutor’s Office, whose chief Katica Janeva is charged with abuse of office and off-the-charts corruption. The ruling SDSM party recently rammed through Parliament a law that would ban the use of unlawful wiretaps as evidence, but the law will likely apply only to SDSM party officials, while the persecution against VMRO-DPMNE officials will continue.