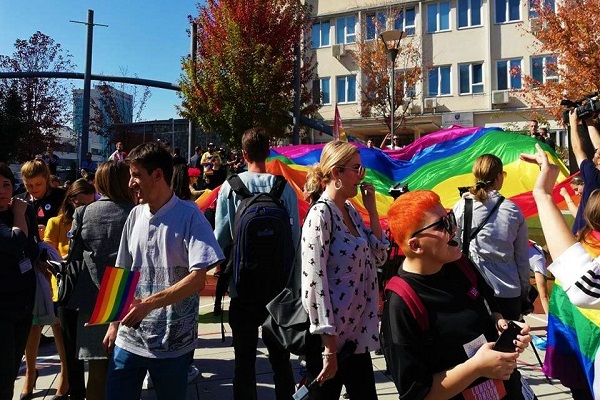 The country’s first-ever Pride Parade will take place in downtown Skopje on June 29, the National Network Against Homophobia and Transphobia announced at a press conference.

The Pride Parade is a march of LGBTI people to ask for support, affirmation, and protection of their rights by state institutions and citizens, including cultural workers who share progressive values and show their solidarity, according to human-rights activist Antonio Mihajlov.

Mihajlov said the Parade creates a space of emancipation and liberation open to anyone regardless of nationality, religion, sexuality and gender identity.

“This year,” said organizing board member Kocho Andonovski, “marks the 50th anniversary of the first New York march known as the Stonewall Uprising, which was a turning point for the LGBTI movement, its fight for upholding basic human rights, and its protest against the persecution of and stigma against LGBTI people.”

“Our country is the last one in the region to hold a Pride Parade,” Andonovski added.

Organizing board member Irena Cvetkovikj said she hopes the Pride Parade would be one of the safest marches.

In addition to the police, Cvetkovikj said, National Network Against Homophobia and Transphobia members will be monitoring the march to make sure all participants feel safe.