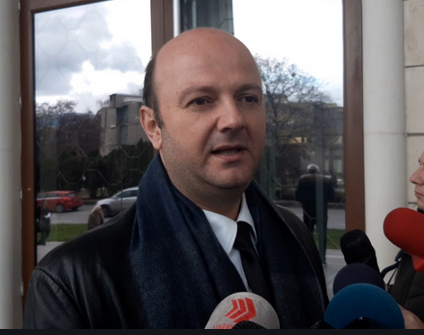 Lawyer Jovica Strasevski addressed Saturday in an open letter  his colleague Ivan Dzolev who is president of the Basic Criminal Court, criticizing him for his recent unlawful acts.

I take this opportunity to point out another unlawful act that you did yesterday. Namely, despite the fact that I have not received an invitation yet, which is known as under Article 127 of the LCP, it is submitted to the defense for a new hearing, which describes the modes of delivery, and Toni Trajkovski did not cancel my power of attorney as his defender and you have violated the law and you another appointed defense in the ex officio procedure. This is a PRECEDENT in the JUDICIARY. In addition to informing the entire Macedonian public about this violation of the law, I will also inform the international community, the Bar Association, which I urge to monitor everything that happens with the lawyers in Criminal Court because there has never been such arbitrariness in the Macedonian judiciary before.

The Bar Association must and I publicly urge them to state their position, the Criminal Court cannot initiate disciplinary proceedings against lawyers for each of their requests, which is both a public threat and an intimidation on us, the Bar must and should stand in defense of lawyers.

The question arises as to why the Judicial Council is silent, why the MoI and the Public Prosecutor’s Office remain silent, until when will they allow arbitrariness and violation of laws, Strasevski asks.

Lay judge in TNT case with expired term submits her resignation, Dzolev refuses to accept it

Dzolev: The president has the right to grant pardons

The Healthcare Ministry reported six Covid-19 deaths over the past day. The deceased included four patients from Skopje, one from Kumanovo and one from Gostivar, aged between 60 and 86. This brings the total death toll of the epidemic to 2,702. There are 190 new cases, diagnosed out of 1,530 total tests...
Macedonia 17.01.21 | 12:00