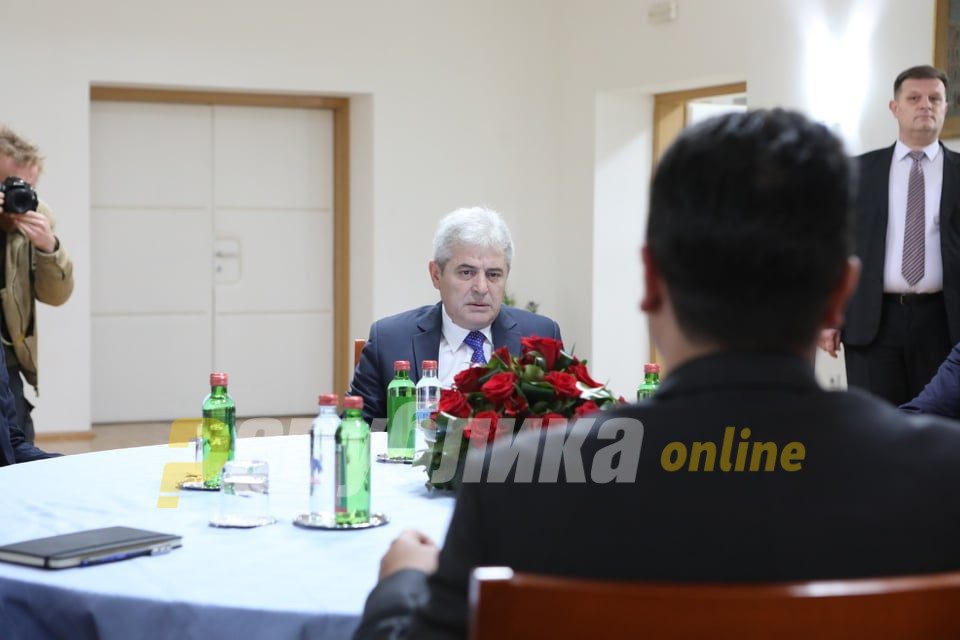 Zoran Zaev and Ali Ahmeti failed to agree to a mutually acceptable presidential candidate during Monday’s round of talks, but said that they remain committed in principle to finding such a candidate. Meanwhile Zaev poured scorn on VMRO-DPMNE presidential candidate Gordana Siljanovska and said he will continue to meet with opposition ethnic Albanian parties, who are undermining Ahmeti’s position.

We decided that, for the concept of One society for all, there is an opportunity to send a message for unity among the citizens and we should dedicate our attention to finding a consensual candidate. We the leaders want that to happen and the institutions of our parties will decide. We opened a procedure in the parties. This is of course a worthy opportunity, maybe we will succeed, maybe not, but we need to have this chance, said Zaev, who added that the two parties will give themselves until the end of the week to decide.

Zaev confirmed that Foreign Affairs Minister Nikola Dimitrov is one of the potential presidential candidates, who he said could receive support from ethnic Albanians as well, even after Albanian language media outlets circulated footage of Dimitrov happily welcoming the release of Johan Tarculovski from the prison in the Hague where he was sentenced for war crimes during the 2001 war which the Albanian terrorist group NLA led by Ahmeti started in Macedonia.

The elections are held on April 21st, with a second round planned for May 5th. VMRO-DPMNE elected its candidate on a convention on Saturday and on Sunday Gordana Siljanovska met with citizens in Ohrid, flanked by President Gjorge Ivanov and VMRO leader Hristijan Mickoski. Zaev said that the university professor and one-time SDSM supporter who parted ways with the left in disagreement over the push to rename Macedonia, does not represent the values of his “one society”.

I will say outright that she is not acceptable. She is outside of all possible concepts. She did not support what the entire world and the huge majority of citizens support. Macedonia made a major step forward, we went to accomplish our decades long aspirations. We are now a country that is ratifying the NATO protocol, we are a country that is an EU negotiator. This is outside of the concept of life, hope and living for the huge majority of the citizens, Zaev said following his meeting with Ahmeti.

Zaev said that a broader list of potential candidates includes Tetovo Mayor Teuta Arifi, former Healthcare Minister Imer Selmani and former Finance Minister Abdulmenaf Bexheti – all ethnic Albanians – even though it is widely assumed that the “consensual” candidate will be an ethnic Macedonian approved by DUI. DUI named several former officials like Denko Maleski and Lazar Elenovski who have or may have had an ethnic Albanian predecessor, but Maleski withdrew himself from running. Zaev specified that SDSM has five candidates of its own which were found to be potentially acceptable to DUI, and this includes Dimitrov, who is not an SDSM party member and was in fact more closely associated with VMRO-DPMNE in the past.

Ahmeti was more reserved than Zaev when asked to name the candidates, he refused to endorse Dimitrov and only said that it would not be a good idea that Zaev is the nominee. Zaev ruled out running for President, but only after bragging about how he would be the ideal “consensual” candidate.