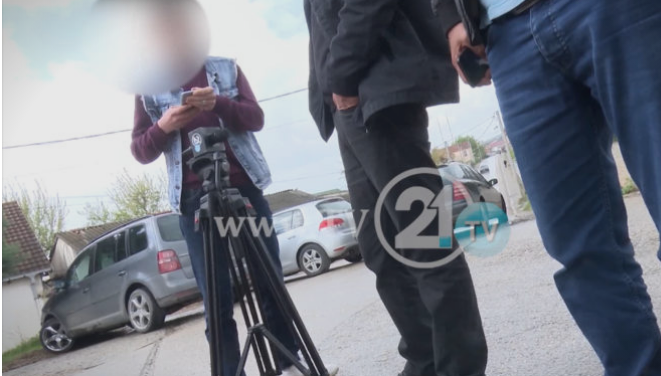 The AVMU Media Agency joined in with political parties and journalists in condemnation of Tuesday’s attack on a crew from the TV21 television station, which was intimidated and briefly detained in the Aracinovo town hall by thugs apparently affiliated with Mayor Milkie Halimi.

The crew from the Albanian language TV station recorded comments from citizens critical of Halimi – an SDSM party appointee – and were pressured to delete the video and escorted out of Aracinovo. The cameraman continued recording through the incident, and TV21 published the raw footage of their intimidation and detention. The Mayor later apologized for the attack and the detention of journalists in her municipal building.

Media outlets work in the interest of the citizens and are a pillar of democracy. Any interference in their work represents a violation of freedom of expression. Attacks on the press are unacceptable, said the AVMU agency, which is the main media regulator in Macedonia.

Several media outlets informed that the reported leader of the attack on the TV21 crew has posted a number pictures with SDSM party leader and Prime Minister Zoran Zaev.

The incident happened as the Zaev Government was celebrating the 14 points improvement which the Reporters Without Borders organization gave to Macedonia. The country remains among the worst in the region in media freedom, and the report glossed over a long list of attacks on the opposition press, while focusing on the allegation that the public MRTV television is supportive of the opposition.

Meanwhile, the RSF report ignores the fact that major critical newspapers like Dnevnik were taken out of circulation, that the important critical Nova TV station was shut down and that the Kanal 5 TV station completely switched its editorial policy to favor the Zaev Government. Also ignored is the recent resignation from Sitel TV editor in chief, who claimed pressure from the Government on the station whose management, along with that of Nova TV, was the target of politically motivated criminal charges.