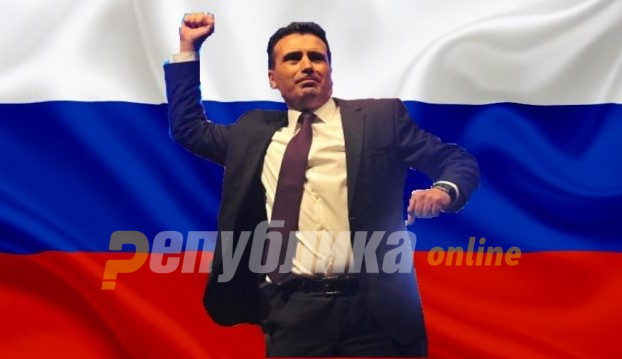 Outgoing Prime Minister Zoran Zaev surprised the public today by giving remarks at the Russian business forum held in Skopje. Zaev has repeated accused Russia of trying to spread its influence in Macedonia and the Balkans, and made this the main element of his pitch for international support he hopes will help him stay in power. And yet today Zaev went all in praising Russia and welcoming its businesses in Macedonia.

Our relations with the Russian Federation are traditionally friend. It is our potential in the economy that is not used sufficiently and we must work in this regard, the outgoing Prime Minister said.

The comments were a marked change in tone, and it comes after Zaev’s humiliating failure to secure the opening of EU accession talks at the latest European Council. While there, Zaev repeatedly threatened to resign and was warning European leaders that unless he receives the opening of accession talks, Russian influence can spread in Macedonia.

In an interview with Buzzfeed in 2018, Zaev blamed Russian born Greek businessman Ivan Savvidis of funding protests against his Government. “The Russian representatives who were here, and also others from Moscow, [don’t] hide themselves that they are against our integration in NATO. Part of them are connected with media, part of them encourage the young people to protest in front of the Parliament, to attack police men, that kind of things. It’s very obvious, Zaev told Buzzfeed. He also compared Russian activities in Macedonia to those in Montenegro, which accused Russia of attempting a coup.

And yet, when asked about this today, Zaev sheepishly replied “I don’t know what statement are you talking about”.

For me there is no alternative to NATO and the European Union. Our interest is, just as other European and NATO countries cooperate with the rest of the world, to cooperate with Russia, China, the Middle East and many other countries as it brings benefit to our people, Zaev added.

Zaev’s comments about Russia were not only meant for public consumption. During a series of humiliating conversations with Russian pranksters Vova and Lexus, in which Zaev believed he was talking to NATO Secretary General Jens Stoltenberg and to Ukrainian President Petro Porosenko, he kept warning the pranksters that Russia is behind the territorial exchange proposal between Serbia and Kosovo – a proposal which is expected to have dire consequences for Maceodnia – and was telling the fake Stoltenberg and Porosenko that this will lead to disturbing precedents in Cyprus, Georgia, Ukraine and elsewhere.

Zaev offered the Krivolak army range to “Stoltenberg”, warned him against Turkish take-over of northern Cyprus

Zaev made spreading allegations about Russian links among the opposition VMRO-DPMNE party a main plank of his re-election campaign. Following the failure in Brussels, after which he was pushed to agree to early elections in April 2020, Zaev’s rallies were full of allusions to “secret agreements” and “third party collusion”. A journalist unquestionably loyal to Zaev recently waited in front of the Russian Embassy as VMRO President Hristijan Mickoski was there for a meeting with the Ambassador and peppered him with questions about the “secret meeting”, while an SDSM official edited a report in a Russian news site to falsely claim that VMRO is receiving money from Russian intelligence.

Dirty campaign: SDSM party official is behind the fake news site alleging that VMRO-DPMNE is funded by Russian intelligence

But now, Zaev’s change in tone was also noticeable in Paris, where President Stevo Pendarovski met with President Macron, who is initiating a rapprochement with Russia, but also with Russian Foreign Minister Sergey Lavrov. Pendarovski said he will happily accept President Putin’s invitation to visit Moscow for the next victory parade.