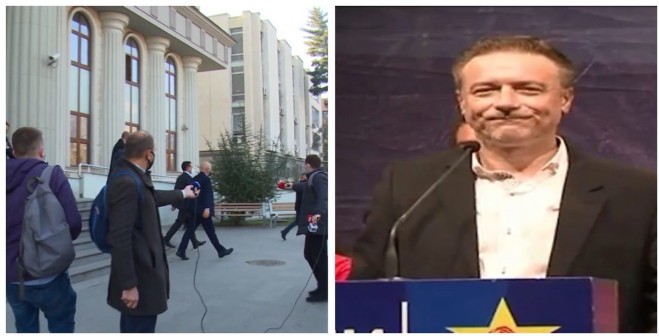 Prime Minister Zoran Zaev fled the press after his testimony in the Skopje courthouse today, as they were eager to ask him about the factions developing in his SDSM party. Zaev faces calls to resign from his former mentor and party leader Branko Crvenkovski, as well as a growing list of top party officials.

In response to the crisis, Zaev wheeled out his chief supporters, from his “rural wing”, that has an uneasy pact with the “urban wing” lining behind Crvenkovski. An overview of who stands where in the SDSM division is available here:

But even some of the stalwart Zaev supporters are becoming shaky. One of them, Interior Minister Oliver Spasovski, dutifully shared the same party press release which was issued in response to Crvenkovski’s challenge, but he then qualified his comments.

This is a clear challenge to Zaev, who in his scandalous BGNES interview insisted that it was the Bulgarian army, fresh after switching sides in the war, that liberated Kumanovo and Skopje. Kumanovo Mayor Maksim Dimitrievski, who is from SDSM but is a rival of Spasovski to the point that the Government undercut coronavirus aid during the initial stages of the epidemic, was on the same page with the Interior Minister and also denounced Zaev’s statement. Dimitrievski has a track record of statements that counteract Zaev’s conciliatory comments on national identity issues.

Another influential Mayor who has been at odds with Zaev on identity issues in the past, Sasa Bogdanovic from Skopje’s Centar district, also criticized Zaev’s comments. Bogdanovic is outspoken in his pride in his Serbian heritage and does not look lightly at Zaev’s rapprochment with Bulgaria.

It is important that we, as a society, know the price we are asked to pay. I believe that if the intentions are honest, and so is the criticism. We should reach some level of unity as a society, and not as a party, Bogdanovic said.

Either way, the situation remains fluid, with SDSM having an exceptionally thin majority in Parliament to fend off the vote of no confidence announced by the opposition. Some criticism was aimed at Zaev from two of his minor coalition partners, the DS and LDP parties, who together hold three seats in his coalition, which has only 62 votes out of 120. The DUI party is also facing one disgruntled representative who has an ax to grind against two DUI members of the Government. The procedure to put the Government to a vote is expected to begin next week and conclude the week after.