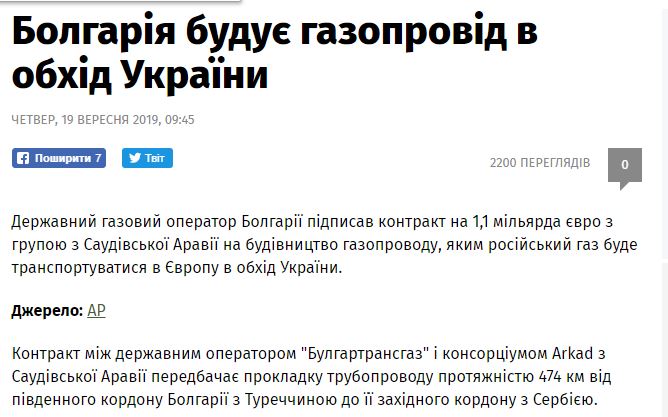 Bulgaria continues to buy Russian gas, but the country wants to bypass Ukraine in the future. Hungary is also looking for alternative solutions to the Ukrainian gas transit through the future Russian gas pipeline running towards Turkey, the V4 news agency reports.

The Bulgarian state gas operator has concluded a contract in the value of 1.1 billion euros with a Saudi-Arabian company for building a natural gas pipeline that would carry Russian natural gas into the Balkans bypassing Ukraine, Ukrainian portal epravda.com.ua reports. The contract between state operator Bulgartransgaz and the consortium led by Saudi Arabia’s Arkad Engineering is for a 474-kilometer pipeline that would extend from Bulgaria’s southern border with Turkey to its western border with Serbia, delivering Russian gas to Serbia, Hungary and Austria, American news agency AP reports.

At the beginning of July, several reports were published that Moscow was preparing to supply natural gas to its European customers bypassing Ukraine. The Ukrainian transit agreement expires at the end of this year.

– We believe we won’t need a Plan B. There have always been obstacles over the last four years, but we have always managed to find a constructive, good deal, EU Vice-President Maros Sefcovic said after he met with Russian Energy Minister Alexander Novak in Brussels in mid-July. The Russian minister then said that trilateral talks with the EU could only take place in mid-September, after the early elections in Ukraine.

Ukrainian gas operator Naftogas CEO Yuri Vitrenko said in July that the current transit agreement was not in the best interests of the country and that the European Union should be prepared for the situation that there will not be a gas transit deal in effect next year.

Poland and the liquefied gas exporter United States are vehemently opposing the extension of the contract. The question is how Ukraine will ensure its own gas supply if the country is left with an empty pipeline after the termination of the Russian gas transit agreement.