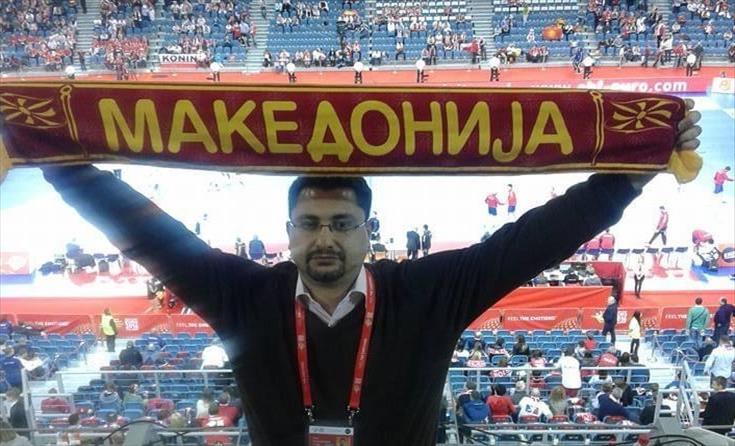 Sportscaster Toni Stojanovski would’ve been awarded if he were in any other country, said VMRO-DPMNE spokesman Naum Stoilkovski. Stojanovski is facing calls for his resignation from angry commentators on the left after his emotional comments during the Macedonia – Georgia game in Tbilisi and especially after the Macedonian win that secured our team a place on the European Championship.

MRTV sportscaster one of the heroes of the game

Rejoice Macedonia. Our football players are going to the big league. Macedonia is going to the European Championship! They are denying our name, our nation and our origin, and yet here we are in Europe! Here we come, with all the rest, the countries we brought literacy to, they will stand still at our anthem. This is for all, Orthodox Christians, Macedonians, Albanians, Turks, all who play for our team, telling those who lead our country that they must take good care for it. Macedonia will live on!!!, Stojanovski exclaimed after the win.

But the problems is that the MRTV public television, as much of the political arena, are walking on eggshells over any exclamation of national pride, after the treaties Zoran Zaev signed with Greece and Bulgaria. Just mentioning the name of the country – Macedonia – could get you fired unless it is preceded by the imposed adjective “North” and that is exactly what SDSM party affiliated commentators are calling for.

The sportscaster is there to comment. He is not an anchor, he does not reprint a report from the news desk. He is expected to offer a subjective approach. Commenting is work of art, a subjective view on the events. The Georgian sportscaster was certainly doing something different and was not celebrating. You become a sportscaster after a long career, after covering many events and when your team develops trust in you. Toni rose the entire public to its feet. Everybody heard him and we can’t wait to hear him on the European Championship, said Stoilkovski, who also worked for MRTV.

After the game, thousands of people flocked to the squares across Macedonia, and many chanted “Never North, Always Macedonia”, as well as unprintable comments aimed at Zaev. In response, the Government avoided the customary heroes’ welcome for the team at the Macedonia Square and the passage through the triumphant Macedonia Gate. Zaev met the team on the border with Kosovo, and gave a short speech.

Mickoski: If Bulgaria continues to insist on its demands, we will rescind the treaty and call for a new one

Macedonian Academy President Ljupco Kocarev condemned the plans by the Education Ministry to abolish the Macedonian language and literature studies at the main public Ss. Cyril and Methodius university in Skopje. The two courses will be rolled in with other literature and language studies. According...
Macedonia 27.02.21 | 15:46