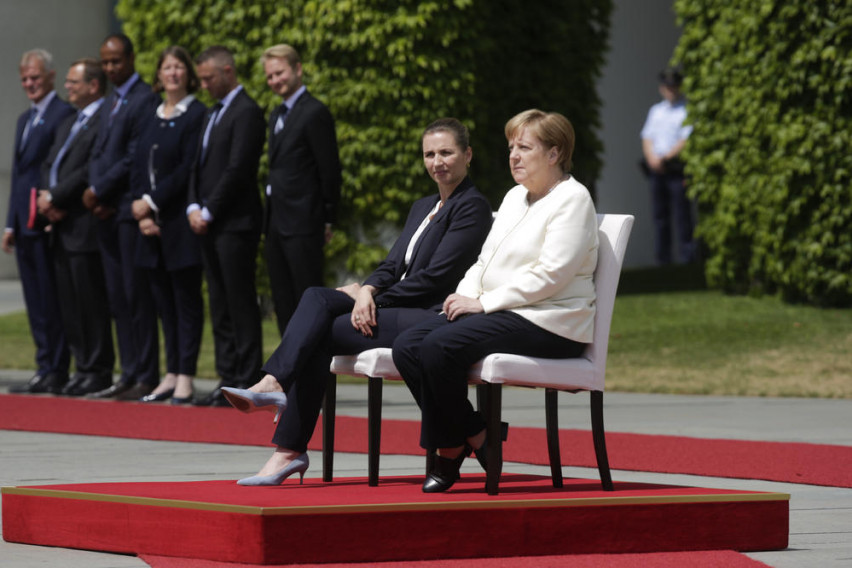 Angela Merkel sat through the German and Danish national anthems during a ceremony welcoming Denmark’s prime minister to Berlin. The German chancellor reportedly requested the change in protocol a day after she was seen shaking in public for the third time in as many weeks, Guardian reports.

Merkel appeared calm as she and the new Danish leader, Mette Frederiksen, took seats on white upholstered chairs on the red carpet during military honours outside the chancellery in Berlin. The chancellor remained still throughout the hymns, moving only to smile and nod at her visitor.

A report in the Bild newspaper suggested Merkel had asked for a change to the protocol in which the leaders would normally stand through the ceremony. A day earlier, Merkel was seen trembling while standing at the same location as she welcomed the Finnish prime minister, Antti Rinne.

Afterwards, the chancellor, who intends to step down by 2021, said she was “doing fine” and indicated she believed the cause of the shaking bouts was at least partly psychological.

The latest episode, which appeared to stop when Merkel moved, was thought to be less serious than previous bouts. The 64-year-old was seen moving uncontrollably during military honours for the visiting Ukrainian president, Volodymyr Zelenskiy, in blazing heat on 18 June.

“I am going through a phase of processing the recent military honours with President Zelenskiy,” Merkel said on Wednesday. “This appears not to be quite finished yet, but I am making progress and will have to live with it for a while.”

After the initial bout, she blamed dehydration, later claiming she recovered after a drink of water. But a week later she had a similar episode in more comfortable weather while appearing with the German president, Frank-Walter Steinmeier, at the Bellevue Palace in Berlin.

One German media report, citing government sources, suggested Merkel’s second shaking bout was triggered by the memory of the first. She was also seen shaking during military honours in humid conditions in Mexico City in 2017.

Merkel’s decision to sit through the ceremony will further fuel speculation about whether the long-serving leader’s famously gruelling schedule – including frequent all-night marathon meetings – – has begun to take its toll on her health. Explanations floated in the German press range from dehydration to anxiety, overwork and stress.

The VMRO-DPMNE Central Committee appointed Georgija Sajkoski as the new Secretary General of the party. Sajkoski has been named after Igor Janusev resigned the post. Congratulations on your appointment. We have much work to do, until our final victory over the mafia, said party leader Hristijan Mickoski. Sajkoski...
30.09.20 | 21:45