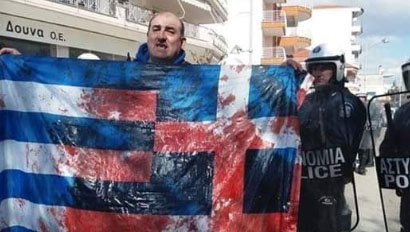 At least four Greek police officers and one civilian were left badly injured in the protests which erupted in the industrial city of Kajlari/Ptolemaida in northern Greece – the area Macedonians refer to as Aegean Macedonia.

Greek protesters were marching against the Prespa treaty under which Macedonia was forced to change its name into North Macedonia, but Greece gave up its right to veto Macedonia’s EU and NATO accession again. The protest was caused by the visit of the Greek Citizen Protection Minister Ogla Gerovasili. The protesters were chanting “treason” when the police used tear gas and batons to disperse them.

Footage from the incident shows injured officers and protesters being given first aid and taken from the square where the fighting took place.

The Prespa treaty faced opposition from large majorities in both countries and while the repression going on in Macedonia prevented major protests, it sparked huge rallies in Athens.