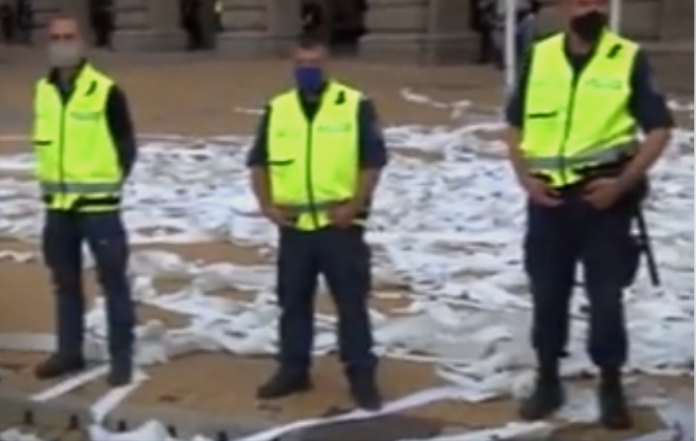 Several hundred people protested the government in the Bulgarian capital on July 25 despite a cabinet reshuffle meant to appease them.

Protesters shouted “Resign!” and “Mafia” as some threw tomatoes and rolls of toilet paper at the Council of Ministers building in central Sofia.

The protests, now in their 17th straight day, continued despite Prime Minister Boyko Borisov replacing four ministers this week in a reshuffle meant to end calls for his resignation.

Protesters say that only the resignation of the entire government would satisfy them.

Borisov dismissed the finance, economy, and interior ministers to curb speculation that the three were serving the interests of powerful businessman and media mogul Delyan Peevski, who is linked to the opposition Movement for Rights and Freedom (DPS). The tourism minister was also replaced.

The replacement of the four ministers came after Borisov’s center-right coalition government survived a no-confidence vote on July 21.

It was initiated by the opposition Socialists who accuse his government led by the GERB party of failing to fight endemic corruption.

Thousands of mostly young people have demonstrated in Sofia and other towns against the government’s perceived favoritism of powerful behind-the-scenes oligarchs.

The protests were sparked by a raid on July 9 by the Prosecutor-General’s Office on the presidential headquarters.

The demonstrators condemned the raids as an attack by the government and prosecutor-general against President Rumen Radev.

Radev has backed the protesters, urging them to drive the “mafia” out of government.

The searches at the presidential headquarters came after Radev said the National Protection Service (NSO) — which is responsible for guarding the president, prime minister, and other high-ranking officials — should stop protecting Ahmed Dogan, the honorary chairman of the DPS party.

Dogan is one of the most powerful people in Bulgaria. Many people consider his DPS, a largely ethnic minority Turkish party, to have control over the nation’s judiciary, including the prosecutor’s office.

Protests all over the country: Outside Pendarovski’s Office, the ministries, the courts, the administration, the doctors…

Working group on European cooperation to hold meeting in Sofia