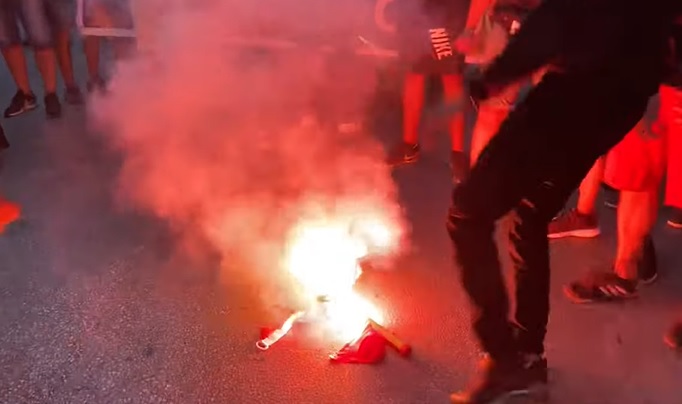 Turkey and Greece criticized each other on Saturday after the first Muslim prayers were held at Istanbul’s Hagia Sophia since its reconversion to a mosque.

The Foreign Ministry in Ankara condemned Athens for its “hostility towards Islam and Turkey.”

It rebuked Greece’s government and parliament for “provoking public opinion,” and said the Turkish flag was set ablaze in the city of Thessaloniki, according to ministry spokesman Hami Aksoy.

Already fraught relations between the neighbouring NATO members have deteriorated since Turkish President Tayyip Erdogan signed a decree reconverting Hagia Sophia, a museum for 86 years, to a Muslim house of worship.

On Friday, as Erdogan attended prayers at the UNESCO World Heritage site, church bells tolled in mourning and flags flew at half-mast across Greece.

Greek Prime Minister Kyriakos Mitsotakis said what had transpired was “not a sign of power, but proof of weakness.”

The Hagia Sophia Grand Mosque opened for worship “in accordance with the will of the Turkish nation,” said Aksoy, adding that it “belongs to Turkey like our other cultural assets.”

The Foreign Ministry in Athens said the 21st century’s “international community is witnessing with astonishment the rants of religious and nationalist fanaticism in present-day Turkey.”

Built by Byzantine emperor Justinian I in 537 as the largest church in Christendom, Hagia Sophia was converted into a mosque after the Ottoman conquest of Constantinople in 1453, and became a museum in 1934.

Ankara and Athens have long been at odds over oil and gas exploration rights in the eastern Mediterranean, refugees and Cyprus.