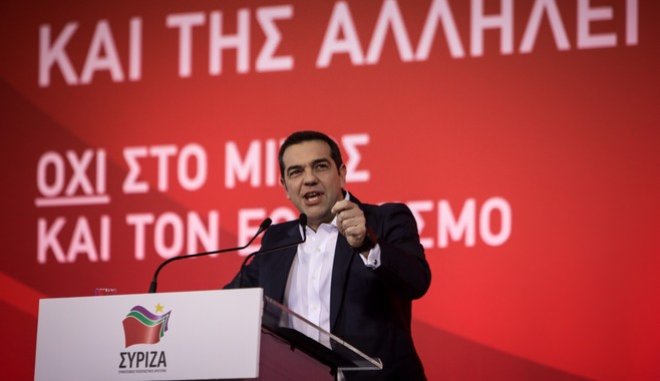 The year 2019 will be historic, not only because it symbolises the end of “crisis Greece” but also the start of a new Greece “of the people and the many,” Prime Minister Alexis Tsipras said in an article published in the Greek version of the “Economist – The World in 2019” that was distributed with the newspaper “Real News” on Sunday.

“There is a prospect once again. The country is finding its pace again, normality has returned and society has a reason to feel optimistic once more,” Tsipras said, adding that eight years of austerity policies that had undermined social cohesion were now “being left behind”.

The period of the programmes had ended in August, both formally and in fact, but the injuries had not yet fully healed, he noted.

“This required the presence of a new government, different from all those that the Greek people had known since democracy was restored, which in 2015 proceeded on the basis of exiting the crisis and supporting the social majority,” Tsipras said.

“Greece no longer looks like a hard-to-solve puzzle for the Eurozone and the European Union. Quite the opposite, in fact,” he added, noting that the end of the economic and refugee crisis has not only failed to signal the start of a period of stability in Europe but, on the contrary, had been the start of a new, perhaps more serious, political crisis.

“Europe can now clearly see the consequences of punitive austerity, growing inequality and, of course, a lack of solidarity and shared responsibility between its members when there are stakes of historic importance,” the Greek prime minister said.

Currently, he said, the tone was being set by paradoxical far-right rhetoric that was gaining ground in all European countries, even the strongest, but not in Greece.

“Here, a progressive government succeeded in leading the country out of the programmes, securing fiscal stability and correcting injustices against the many, handling the refugee crisis on humane terms and with solidarity,” Tsipras said.

In addition, it recently put an end to a almost 30-year dispute with its northern neighbours, that had nurtured nationalism and the far right on both sides of the borders over the years.

“In this way, Greece is regaining its leading role in the Balkan region, not by imposing itself but as a force that takes the lead in the cooperation and joint development of the countries of the region, despite all those that wish, for their own selfish interests, for the Balkans to forever remain the powder-keg of Europe,” Tsipras added.

The coming year, according to the prime minister, will mark the third year of economic growth and stable economic recovery for Greece, whose impact would soon start to be visible in people’s daily lives, while the focus of the government’s policy will be a redistribution of the wealth to ensure political stability, social cohesion and a stable, prosperous economy.

This would come about by measures to restore collective bargaining in the labour market, stamping down on undeclared labour and wage increases to support income and consumption.

Tsipras welcomed the fact that 2019 will be a year for multiple elections, including general elections in October, saying this will give voters a chance to “look at things as a whole, to judge and compare what has been done,” the contrast between the “recession, extreme poverty and social conflict,” when the government took over “to the Greece we are building, the Greece of equitable growth, labour and social justice.”