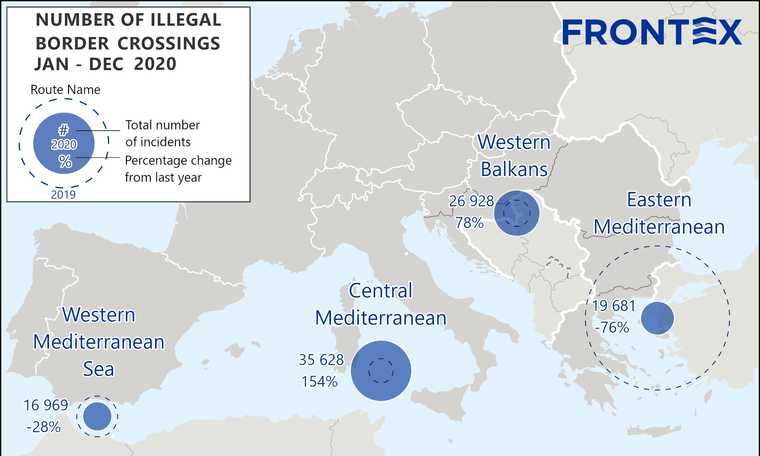 Migration remains a serious problem southern Europe because, despite the pandemic-related restrictions, the number of newcomers reaching the continent has only decreased minimally, the V4 news agency reports.

The year 2020, for the most part, was about movement restrictions, border closures and the cessation of passenger traffic. Contrary to expectations, however, even these drastic measures have proved insufficient in terms of curbing illegal immigration, according to data from the EU’s Border and Coast Guard Agency, Frontex. Official figures released by Frontex suggest that a total of 124 thousand illegal immigrants arrived in the European Union last year, making 2020 the first year when annual immigration showed a decrease – instead of an increase – on a year-on-year basis.

The pandemic, however, has not put an end to migration. Some 8 thousand people made landfall at the Canary Islands in November alone, and a total of more than 22 thousand a year. The results of the border closures were most noticeable in Greece, where Europe’s largest migrant reception centres have been established on the islands of Lesbos and Moria. Statistics show that the number of illegal border crossings has dropped by about 76 per cent but – encouraged of NGOs that provide transport services at sea – a string of migrant boats set sail again from Africa in early 2021.

Greece’s migration ministry has announced that it intends to set up migration centres with expanded capacities at the country’s borders, at Evros and the island of Leros. Although Migration Minister Notis Mitarakis looks determined to build the new camps to accommodate new arrivals, local communities are unhappy with the plans.

#openarms spots a second boat adrift in international waters, with around 97 people on board, no lifejackets. Rescue operation begins.
#Everylifecounts #med pic.twitter.com/azLGjMaMzR

Several local municipalities along with the local church have issued a joint statement, saying “we will not accept the expansion, while we demand the improvement of conditions in existing structures”. Local communities complained that they haven’t been consulted about the plans. Orestiada community also released a statement, pointing out that the region has been carrying the burden of the refugee crisis for many years and is unable to tolerate further expansions or new facilities. The minister made it clear that he will proceed with the plans, arguing that the expansion of the camps will contribute to curbing the inflow of migrants and improving public security for local residents.