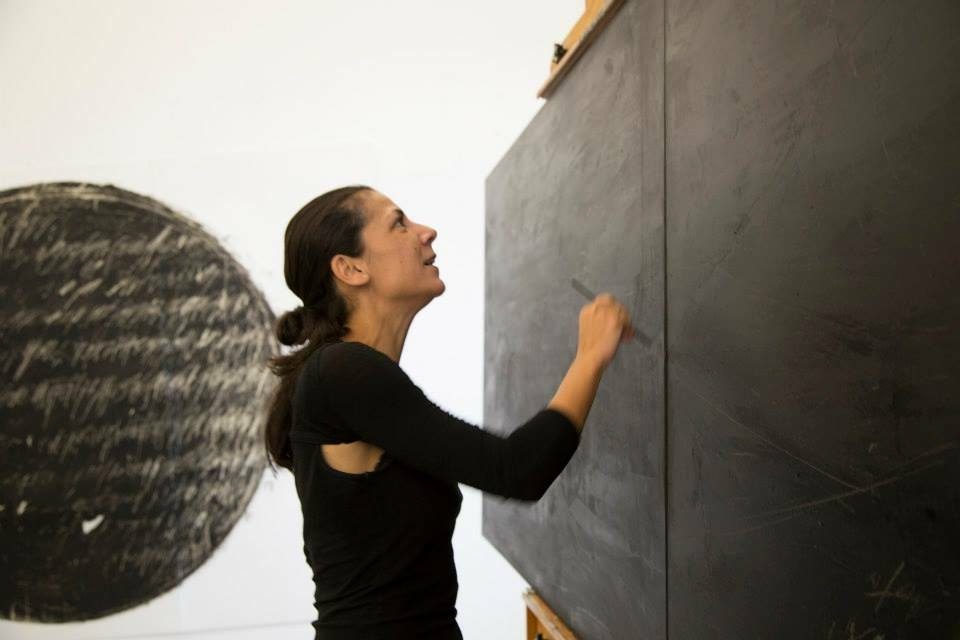 Her artistic journey started at an early age. She took up residencies in Paris, Slovenia, Vienna and Nuremberg (Germany). After her first solo in New York in 2007, she has lived between Skopje and New York and continued to be active in the New York art scene, and we used her presence in Skopje for a conversation where we talked about art, challenges, successes, difficulties …

You are a very fruitful and successful artist. How many exhibitions have you realized so far?

My work has been featured in more than 20 exhibitions with thematic, stylistic and current sections that present Macedonia’s fine arts in domestic and foreign museum institutions: Museum of Contemporary Art – Skopje, Museum of the City of Skopje, The National Gallery – Macedonia, 107 Macedonian artists at the Cite des Arts in Paris, organized by DLUM and thematic exhibitions at Gallery MC in New York City. So far, I have realized six solos in Macedonian museums, cultural and art centers, festivals and galleries in Macedonia: the Museum of Contemporary Art – Skopje, the Museum of the City of Skopje and the Gallery of DLUM, the Cultural Center “Grigor Prlicev” – Ohrid within the Ohrid Summer Festival and Art Gallery “Vangel Kodzoman” – Struga as part of the “Struga Poetry Evenings” manifestation. I have participated in 24 art biennials and festivals and Open Houses, including: Biennial of Young Artists – Museum of Contemporary Art Skopje, Biennial of Miniature Art- National Gallery of Serbia, Ohrid Summer Festival and Struga Poetry Evenings, Sarajevo Winter Festival, Bosnia and MANA Festivals and Open Houses and Juxtapoz Art Festival – New York, USA. I participated in the prestigious Art Basel Miami festival, represented by Mana Contemporary, as the only Macedonian artist in the history to participate at this prestigious festival and I showcased my work along authors like Julian Schnabel, Yigal Ozeri, Ray Smith, Sante de Orazio, Carole Feuerman, Eugene Lemay, etc.

I suppose your works are being sold at some of these exhibitions. Where can they be seen? Are they part of a collection? Do you have any information about this?

My works are part of several private and public collections in our country and worldwide, including government institutions, embassies, museums, galleries and libraries…

You have received significant prizes and awards. What do they mean to you? How do you regard them, as obligation, as burden, as deserved recognition…?

I believe that any recognition is a great joy for every artist, but it is certainly a result of years of work, effort, education, ups and downs…

After your first solo in New York in 2007, you have lived between Skopje and New York and continued to be active in the New York art scene. Is it hard to be an artist in the US? What is your experience?

My artwork has been featured in many prestigious magazines, newspaper articles, and museum and gallery catalogs by eminent historians and art theorists worldwide. My studio residence is at Mana Contemporary, a leading Contemporary Art Center in the New York City area since 2012.

In 2014, Mana Contemporary represented my work at Art Basel Miami, within the Monumental exhibition. When creating a project in the studio – the residency in Mana, Mana Contemporary produced a documented video of the project’s process: A REACTION, which is featured on the official website of Mana Contemporary: Artists at Mana Maria Pavlovska.

In 2015, after two group and solo exhibitions in Drawing Rooms Gallery NY, Victory Hall Press NY, it printed Monograph “Reaction / Drawing cycles 2015-2015″, “10 Years of Drawing”, in the program annual Editions of Authors that the Gallery represents and exhibits their works.

In 2017, with my drawings I was invited and featured in THEIA MANIA, Dallas Athent poems and M.Pavlovski’s drawings, published by the leading publishing house in the United States, New York – Black Squares Editions, owned by leading New York art critic John Yau and where the design is processed by Eve Siegel, Oxford Press and Gugenheim Museum NY. The book was listed 8th among the 20 best books in the US in 2017.

My works were selected for participation in the “Exhibition of 50 women authors worldwide”: Please Touch; Body Boundaries and Senses and Perception / An international exhibition of ten female authors, along with Yoko Ono, Cindy Sherman, Louise Bourgeois, Carole Feurman among others, represented by Mana Contemporary and Carole Feuerman Foundation in April 2018. The exhibition was open for 6 months and it lasted until October 2018.

With all the abovementioned results, I can say that the work and the authentic artistic expression have been noticed in a wider circle of art critics and art connoisseurs.

As a result of this success, this year you were invited to take part in the 58th Venice Biennale…

True, my work and I personally have been invited to take part in the 58th Venice Biennale – 2019 / May 11 – November 24, 2019. My project “A Reaction” has been noticed, nominated and invited to represent our country for this year by curators at the 58th Venice Biennale, supported by the European Cultural Center and the Global Art Affairs, with indicated and given space at Palazzo Mora, central location in Venice, first floor / Space A & Room 2, 173m2. , as they themselves explained – as the project deserves. The project and its presentation are supported by Mana Contemporary, Fondacion Sebastian and Carole Feuerman Foundation. I hope that also with the support of the Ministry of Culture of the Republic of Macedonia, my project will be presented at the Venice Biennale.

But before Venice, you have an exhibition in Manila and several more activities in New York. Tell us more about it?

On January 21 with the exhibition – a project; “White of Mine II” will open the 2019 season of the prestigious Manila House Gallery for a period of 1 month. In this Gallery, among other prestigious names, I would like to mention the Jeff Koons, a prestigious American artist who exhibits in the same gallery. Also in 2019, there will be cooperation with Master Printer Gary Lichtenstein / Silk Screen Editions NY, where I will work on my “Silk Screen Prints Editions” produced by the prestigious and unique Gary Lichtenstein of the edition prints/maps. Gary Lichtenstein Silk Screen Editions is already representing and collaborating with authors such as Richard Prince, Marina Abramovic, Richard Mayer, Yigal Ozeri, Carole Feuerman, Eugene Lemay, John Battle… In 2019, I also received an invitation and I will have a solo show at Boricua College Gallery, Bronx campus in New York, a gallery in Boricua College, where I will also have two thematic lectures for students during the two-month duration of the exhibition. Boricua College has three locations in New York, having its own campuses in Brooklyn, Manhattan and the Bronx. Thus far I have already exhibited in two locations, at Boricua College Gallery – Brooklyn, Bedford campus in 2011 and at Boricua College Gallery – Brooklyn, Graham campus in 2013, also supported with lectures in the two-month duration of the exhibitions.

You come from an artistic family. Your father, Taki Pavlovski is a well-known painter – your sisters – a musicologist and a pianist … Did the artistic environment lead you to these waters or you simply had art in you?

Coming from a family of creative artists – my father is an esteemed painter internationally, (National Order of Merit Award for the Arts 2011, Macedonia), my older sister is a leading musicologist and my younger sister is an international classical pianist – it is apparent that my artistic energy is ingrained within the very fabric of my being. Although part of a distinguished cultural family legacy, it can be said that I have achieved significant recognition in my own right.

Critics have described my work as having “a strong personality” which “translates my topics of choice into pictorial language that demonstrates a quietly powerful eloquence”. Critics worldwide say that my drawings and paintings with work reflect painting as a battlefield, where light and darkness fight and the result is unpredictable. One sees the lightning bolts of ideas at work, as they are being worked out. This sort of simultaneous image “process/result” dialectic lies frozen in space, stimulating the viewer to actively participate in the image creation themselves by way of investigation, inviting myriad readings within a given theme.

Mickoski interview with TV21 this evening