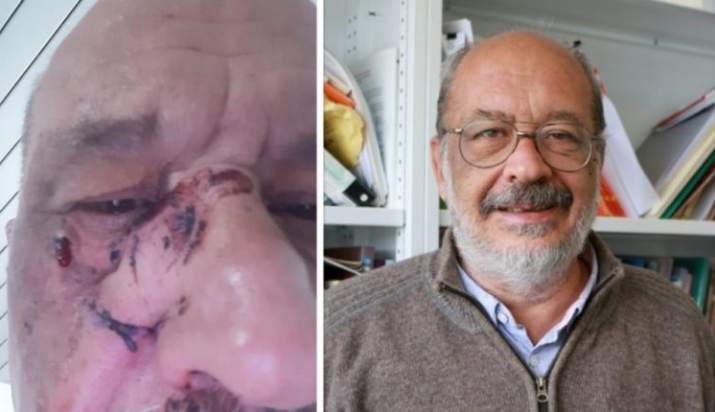 Distinguished linguist Ilija Casule, who is a member of the Macedonian Academy of Sciences and Arts and a strong critic of the Zaev regime and its continued concessions that undermine Macedonian national interests, claims that the police is covering up an attack against him. Casule was beaten up on Saturday.

Casule says that he was driving through Skopje and noticed he is being followed by a car whic his trying to intercept him. He drove through the eastern parts of the city and into downtown, with the car in pursuit. He had to stop to a traffic light near the City Park, when three men came out of the car and started beating him while he was still in his own vehicle.

Their blows jabbed my glasses deep under my eye, and as they are metal framed, blood began to pour out. I also sustained eye and rib injuries, Casule says. Casule also insists that officers would not allow him to make a report of the attack when he went to the central police station. “This was a planned action against me”, Casule insists.

His subsequent attempts to inquire with the police if they are even investigating the attack against him have also ended with no results. Casule is a prominent critic of the treaties Zaev signed that undermine Macedonian national identity, and threatened to leave the Macedonian Academy is the plan to rename it, adding the imposed name “North Macedonia”, goes ahead.

Gostivar: Rapist charged for an assault perpetrated in December