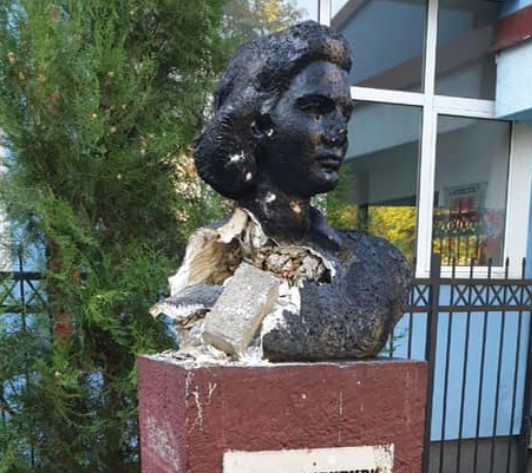 A bust of partisan female fighter Vera Ciriviri – Trena in Skopje’s Karpos district was demolished yesterday. The bust has been attacked twice in two days, with the second attempt inflicting significant damage.

It is placed at the entrance of the elementary school that bears her name. Karpos Mayor Stefan Bogoev condemned the incident and said that the police has been alerted and is working to find those responsible.

Vera Ciriviri was a young Communist activist prior to World War Two, who was active in leftist student protests. She joined the partisan units since 1941, and the Bulgarian authorities issued a reward for her capture. In 1944 she was found out in a house in Stip, chased by the police and shot, before eventually killing herself to evade capture.

The incident happens at a time when Bulgaria presented a list of demands which Macedonia must meet to be allowed to advance in its EU accession talks. Among them is the request to stop referrences to the Bulgarian rule during World War Two as “Bulgarian fascist occupiers”.