Citizens of Tetovo notably sided with the protesters today, during a demonstration aimed at the office of the DUI party and the city hall. Protesters demanded accountability from DUI, its leader Ali Ahmeti and Mayor Teuta Arifi, as well as from the Zaev regime, for the catastrophic fire in the Tetovo Covid hospital that killed 15 people.

Families of the killed and the ethnic Albanian opposition parties have strongly condemned the corruption and incompetence of the Zaev – Ahmeti regime, primarily the way the improvised Covid hospitals were built, through a crony contract and without any regard for fire safety. Police had to intervene to keep the protesters away from the DUI party HQ just west of Tetovo, but media crews showed how citizens would open their doors and help the protesters move from yard to yard, to avoid the police blockades. 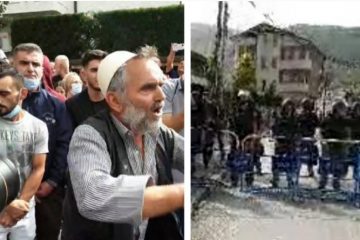 DUI thinks it has the support of the Albanians, but it doesn’t, a protest organizer was filmed saying in an emotional speech.

In one instance, a boy who participated in the protests went missing, apparently seized by the police. Ibin Emshiu, who lost his father and brother in the fire and was co-organizing today’s protests, warned the police chiefs that they will be held accountable if protesters are beaten and intimidated.