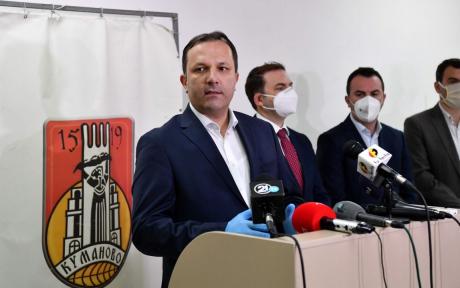 The Government confirmed that some of its key officials – including interim Prime Minister Oliver Spasovski – will go into self-isolation. Spasovski, Healthcare Minister Venko Filipce, aid effort coordinator Deputy Prime Minister Bujar Osmani and Education Minister Arbr Ademi were all present at the meeting of the Kumanovo crisis committee yesterday, to discuss the dire situation in this city. Today, Kumanovo Mayor Maksim Dimitrievski, who chaired the meeting, said that he was diagnosed Covid-19 positive.

Minister Filipce, who was the face of the crisis management effort, said that he will adhere to the recommendation and will remain at home. He did not specify for how long will the self-isolation last – it is usually a period of two weeks.

I respected all safety precautions during the meeting and wore protective gear, as did all others who were present. I expect that expert epidemiologists will prepare an estimate for me and for the other Government officials. Meanwhile, the Healthcare Ministry will continue functioning as usual and I will remain in constant communication with all involved in the effort and will coordinate all aspects of the crisis management, Fiipce said.

The Government said that they were prepared for this possibility and have electronic systems in place to make sure the top officials remain able to act.