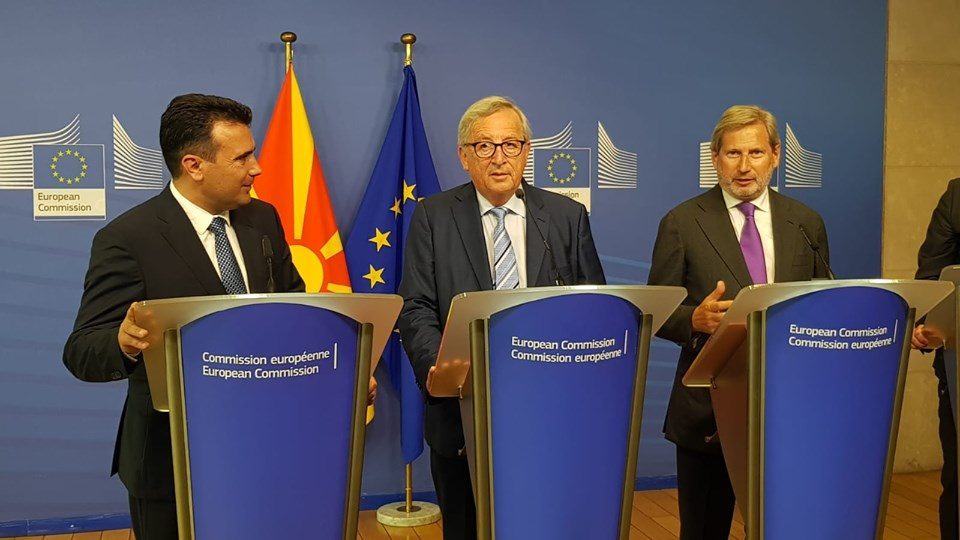 Zoran Zaev met with EU officials Jean Claude Juncker and Johannes Hahn in Brussels to ask them to help ensure that member states honor the promise to open accession talks with Macedonia, especially after the imposed name change. The issue is becoming a major source of problems for Zaev, who rammed the new name through Parliament using “Balkan tactics”, as advised by Hahn, but now faces losing the main prize – EU accession talks.

In their five years report, the European Commission listed North Macedonia and its success among the 20 greatest EU achievements for the past period. This is a major recognition for us, and even greater encouragement. President Juncker and Commissioner Hahn told us that “our country” is an example of cooperation and friendship in teh region and that others should follow our shiny example, to which I replied that, as a society, domestically we are exemplary of political maturity and European manners. We are fully prepared to open accession talks. Now, it is up to the member states and the EU institutions to keep their word, Zaev said.

France, the Netherlands, Denmark and even many in Germany are opposed to making the move, at least in June, as Zaev promised would happen when he embarked on the process to rename and redefine Macedonia.

During their joint press conference, the two outgoing European Commission officials agreed with Zaev that the member states should approve the opening of accession talks. Still, this is at least the eight recommendation that Macedonia received from the European Commission, and all were rejected by the member states – initially Greece, then Greece and Bulgaria, and the opposition appears to grow, not decrease, both in numbers and power, despite the name change.

Following the meeting of the Security Council, President Stevo Pandarovski, urged all citizens to respect all measures against the coronavirus, because the situation, as he said, is extremely serious. The situation is extremely serious, human and material resources are almost exhausted. In the absence...
Macedonia 29.10.20 | 12:22

The arrogant Spasovski: The cluster will be named after the minister who wanted to arrest guests at family celebrations, while he himself didn’t wear a face mask