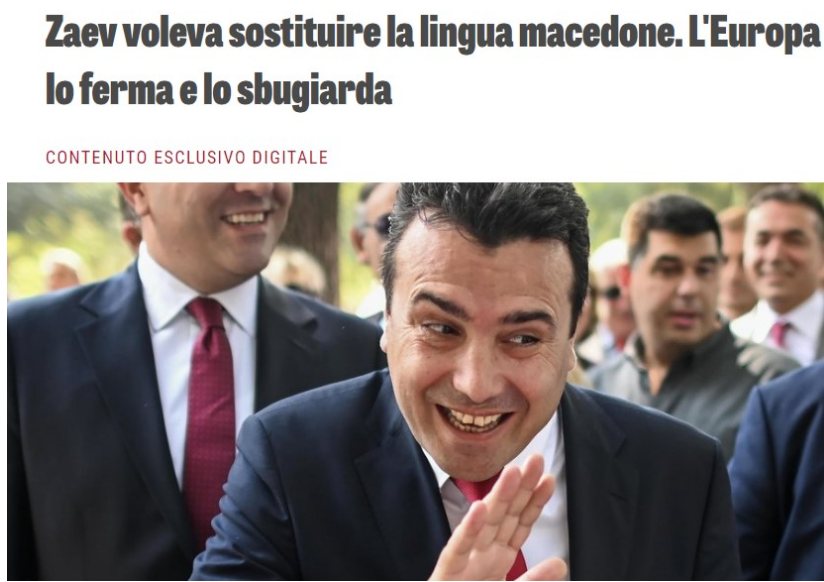 The Italian paper La Verita, which published crucial information in the racketeering scandal, reports that the Venice Commission opinion, which was highly critical of the law on the use of the Albanian language, will be the final blow to the Zaev regime. The Commission found that the law, which turns Macedonia into a fully bilingual country and on which Zaev’s coliltion with the Albanian party DUI rests, is invalid and unimplementable.

Zoran Zaev is struggling to contain the accumulation of negative events. The last one, which will permanently invalidate his international credibility and the solidity of his coalition is about to come from the Venice Commission of the Council of Europe. The Commission was called by Zaev to confirm the existence of the rule of law and his linguistic reform under which the Albanian language, despite being spoke by a minority of the population, would have the same validity as the Macedonian. That reform was the corner stone of the coalition agreement with the Albanian party DUI thanks to which Zaev was able to become Prime Minister in 2017 and is the first act of the project of Macedonian cultural, historical and identity disintegration that also brought he name change, La Verita reports in a video posted today.

The Italian paper, which published tapes which reveal shocking corruption on the part of the Zaev Government, had access to the 25 page document drawn up late last month, which contains fierce criticism and calls the law – not necessary, useless and potentially harmful. This expert opinion found that the law violates the constitutional provisions that the minority languages should be used only in municipalities which have a sufficient number of that minority, and not across the entire country, as Zaev and DUI decided. If found that the constitutional provisions are implemented consistently, in 30 of the 80 municipalities across Macedonia, and that further expansion of this use would bring little benefit given that it would cover municipalities with little to no Albanians present.

A perverse mechanism was created under which one ethnic minority can lead to the collapse of the entire national system. In order to prevent the existence of an international document confirming that Zoran Zaev is acting against the interest of its population and against the rule of law, he has forbidden the representatives of Macedonia to attend the discussion on the draft report in Strasbourg on October 10th. In this way the report can’t become official and Zaev’s Government once again proves that it keeps alive thanks to the deception and manipulation of its citizens, La Verita adds.