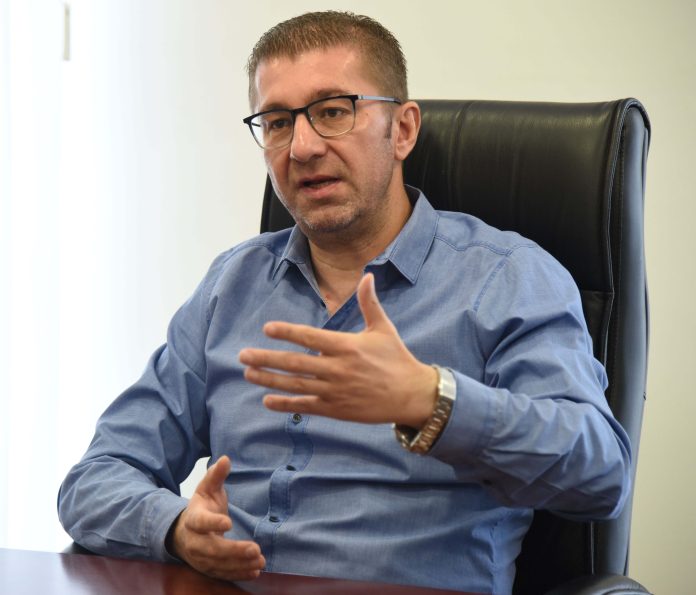 The change of the Constitution will not happen, because it is the last defense of the Macedonian identity. Because if the Constitution falls, if the negotiating framework passes, the Macedonian identity ends, says the president of the largest opposition party VMRO-DPMNE, Hristijan Mickoski, in an interview with the VECER daily. In the interview, Mickoski reveals why they left the hall at the moment when the conclusions on the French proposal were voted and details of a referendum that was announced on the negotiating framework. The leader of VMRO-DPMNE also speaks about the red lines with Bulgaria, the expectations from the process of Macedonia’s approach to the European Union, but also about the expected hardest winter so far.

When asked why instead of voting against, VMRO-DPMNE MPs decided to leave the session on the French proposal, he said that the conclusions did not refer to the French proposal because the last modified proposal was not before the deputies so that they could make a judgment based on it and be able to say whether it was good, because it was not complete, because they did not have the protocol on the table at that time.

There were speculations, there were assumptions, but at no point did we have the protocol on the table, which in itself is a scandal, because you force the people’s elected officials to make a decision based on some document, said Mickoski.

He says that they did not take part in the vote, but they took part in the debate so that the public could hear their position related to that last proposal which has nothing to do with the conclusions.

The pamphlet which was voted by 68 MPs, is unacceptable for VMRO – DPMNE, and the fact that we were not at the moment of voting is only because we did not want to give legitimacy with our presence to something voted by the deputies, Mickoski added.

Asked about the expected pressure on Macedonian-Bulgarian historical commission now that the protocol is signed and whether it will have the capacity to negotiate important topics without political pressure, Mickoski say he expects pressure as it was before.

Yes – I expect from Bujar Osmani pressure on the commission’s work, even though it is no longer related to the European path of Macedonia, because the European path currently depends on only one thing, and that is the change of the Constitution, the matter now does not depend only on the work of the commission and here is this moment where I just say that nothing is lost, because the change of the Constitution is the last defender of the Macedonian identity.

According to Mickoski, DUI’s leadership is making a historical mistake.

They are practically looking Albania’s interest, entered into a coalition and pact with Bulgaria and the Bulgarians, and sold the interests of the Macedonian people and their fellow citizens in Macedonia, and thus left a permanent wound in our collective memory and we will not forget that, he said.

After the Prespa Agreement and the name change, we are now under strong pressure to change history, textbooks, etc… Isn’t the price of entry into the EU too high and from this aspect today, can we bring something back?

Well, Bujar Osmani himself said, and so did Stevo Pendarovski before, that it was better to be at the table together with the other 26 member countries and negotiate, than to be outside the table. At the same time, they forgot to say that we are still at the table, only now we are opposite the isolated Bulgaria, and now we will be at the table where Bulgaria will be together with those 26 other member countries. And they themselves said that if there is no quick change to the textbooks after Bulgaria’s wishes, then we can expect a veto. The Middle Ages is important for Bulgaria because it is the basis of the thesis that we were practically Bulgarians before we were created as an artificial people by the Comintern and Tito, Mickoski answered.

He says that statesman who has basic knowledge of the anthropology of the Macedonian gene and identity would even think of negotiating on this topic, let alone sitting there at the table, laughing and signing contracts.

Now they are not aware, they have security, privileges and so on, but when they lose power and leave the offices, they will face the anger of the people in the street, if they stay here, if they do not escape, and they will be aware and say – Oh, if I could go back in time, I wouldn’t make that mistake, but it will be too late, Mickoski added.

What kind of reciprocity are we talking about in the protocol when Bulgaria sent us a document that does not recognize the Macedonian language even the evening before the intergovernmental session?

No reciprocity, Bulgaria itself says that it does not recognize the language, and we recognize the Bulgarian language. Bulgaria makes statements that for them the Macedonian language is a kind of dialect of Bulgarian and they justify it in a hegemonic way I would say, but that is their policy and that should not surprise us, they have their own strategy, they have their own plan and we see that that they fulfill it, said Mickoski.

When asked about a plan B if the referendum initiative fails, Mickoski says that the consultations on the matter are ongoing and will continue whether the referendum will be consultative, mandatory, when it will be held, whether with this government or with another democratic government, and he adds that they will have to analyze this idea in order to realize it together with the citizens.

When asked why do the government and the opposition function as bitter enemies and fail to build a position of constructive political opponents, at least on national issues, Mickoski says he offered working teams and withdrew from the request for early elections, only for them to say NO, and that’s is why he think it is better for the government to answer this question.

Do you accuse DUI of causing permanent damage to the relations between Macedonians and Albanians. If you win the elections tomorrow, and in the Albanian block DUI wins the most deputies, will you form a coalition with Ahmeti on the principle of a winner with a winner?

We are now talking about whether we will have the Badinter condition or not. If conditionally, DUI is the winning political party, and there are no other possibilities to meet the Badinter condition, then we will sit down and talk and here we have no dilemma, and in this way we will preserve the identity, but we will ask DUI to correct its actions because I am convinced that in the next elections VMRO-DPMNE will have more than 61 deputies, that is, we will have a majority ourselves. But if we have another possibility, a scenario that I wish for, with the Albanian opposition parties and other political parties, then it is time for DUI to go into opposition after many years in power, answered Mickoski.

Regarding the energy and fuel price hike and measures to cushion the blow, Mickoski explained that a few months ago he offered the government to talk urgently with Hungary or Austria and enter into some internal portfolio for the production of gas and electricity and heat, and that gas be stored regardless of whether in Austria or in Hungary. But his proposal was meet with silence, and now we see today that neighboring Serbia is doing it.

I also proposed to lease facilities, even a few months ago for the production of electricity, we could lease 10-15% from the PAKS nuclear power plant – we are energetically super connected with neighboring Serbia, and they are connected with Hungary, and we could obtain energy in a simpler way. We could have leased corn and wheat facilities, but that was not done either and now we see that we need them to survive the winter, stressed Mickoski, adding that he is not optimistic, because they offered a way out, several options and they were all rejected.

As regards the first IGC in Brussels, Mickoski says it was an ordinary photo shoot, and, unfortunately, after that photo shoot, the only loser will be Macedonia, the Macedonian people and the citizens of Macedonia.

When asked how will the notarized declarations be a guarantee that someone will not change their mind, or be blackmailed and vote in favor?