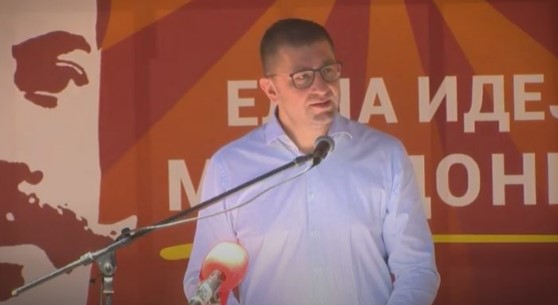 Opposition leader Hristijan Mickoski said he will not resign as leader of VMRO-DPMNE as a group of former officials, many of whom sided with the Zaev regime, demands of him. SDSM tried to impose the issue of divisions in VMRO while it was facing difficult coalition talks with DUI under to form a government with a very narrow majority.

I would like to address our members. You know that we did not inherit a party with 450,000 votes but a divided party, ignored by the international community, attacked from all sides, with our property frozen under a court order, with people imprisoned unlawfully while the real criminals remain at large. It was difficult, we needed to patch up many internal conflicts and make compromises. An evil like this refund can’t be brought down at once but with much effort. And we will defeat SDSM as we will defeat those who work for them but claim to be among us. Many who were actually engaged in crimes are now in Zaev’s lap and are now his best friends. An yourselves why are some court cases against former opposition officials deliberately dragged out and what Zaev gains from this situation, Mickoski said.

He noted that the group of former VMRO officials, gathered around former security card Saso Mijalkov, who call for his removal, never seem to criticize Zaev or SDSM, but devote the entirety of their public activism to criticising VMRO.