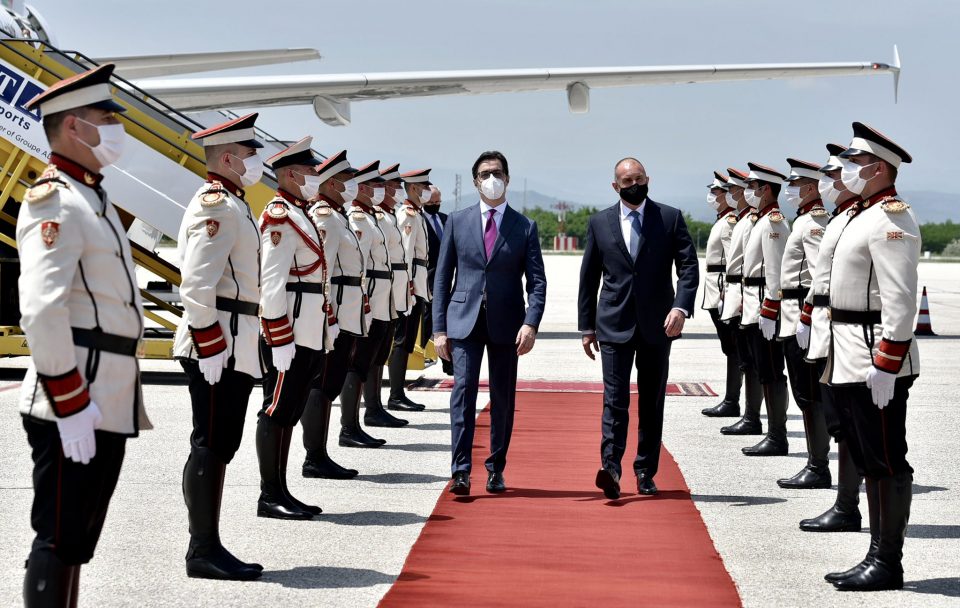 The Presidents of Macedonia and Bulgaria, Stevo Pendarovski and Rumen Radev, had a brief meeting at the Skopje airport today before they flew together, on Radev’s plane, to Rome for the annual honoring of Ss. Cyril and Methodius.

With the relations between the two countries at a low, after Bulgaria’s blockade of Macedonia’s EU accession talks, Pendarovski said that today’s gesture is a step toward warming the relations, but that he does not expect much progress to be made. Bulgaria is without a political Government after the inconclusive April elections and it seems unlikely that its placeholder Government will be able make much progress.

Pendarovski praised Radev for, as he said, his lowering of tensions. “He firmly holds the Bulgarian positions, but he is not insulting us, which was sadly the practice last year, especially ahead of the European Council”, Pendarovski said. At the time Bulgarian Defense Minister Krasimir Karakacanov and Foreign Minister Ekaterina Zaharieva would engage in heated rhetoric denying the unique character of the Macedonian nation and language.

Pendarovski said he spoke with Prime Minister Zoran Zaev who, he added, is a greater optimist that the issue will be resolved. “He is like that in his character, and for the rest of us in the state leadership, when our spirits drop, he lifts us up”, Pendarovski said. Zaev’s frequent promises that the EU is just about to allow the opening of accession talks have often been betrayed in the past several years.

From Rome, where he and Radev had separate meetings with Italian President Sergio Mattarella, Pendarovski said that some new proposals in the dispute include the option of adding third parties in the historic commission between Macedonia and Bulgaria. The idea to use neutral historians, especially from Germany, was raised by Macedonia in the past but it was rejected by Bulgaria.

Pendarovski also said that the outgoing Portuguese Presidency of the European Council proposed a new document – a road-map – for managing the relations between Macedonia and Bulgaria that would be monitored by the Stabilization and Association Council and not by the European Commission. The Zaev regime recently had an outburst aimed at the Hungarian named Enlargement Commissioner Oliver Varhelyi, who they blamed of favoring the prospect of Albania opening EU accession talks while Macedonia is still blocked by Bulgaria. Pendarovski said that there will be no new treaty with Bulgaria to replace or add to the 2017 Zaev – Borisov treaty, and also that there is no need for EU monitoring of the existing treaty.

Tomorrow Pendarovski and Radev will jointly attend the service at the Santa Maria Maggiore basilica, which is the site where the first Slavic religious books were sanctified in the 9th century – an important milestone in the work started by the Slavic apostles Ss. Cyril and Methodius. Bulgaria insists on joint honoring of the saints with Macedonia, as it pushes a narrative of “shared history” between the two countries.