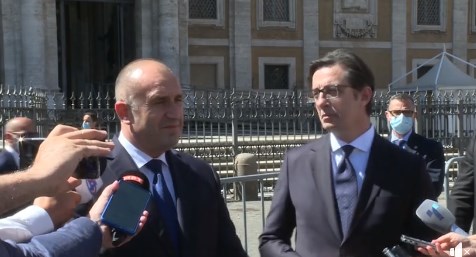 Bulgarian President Rumen Radev dismissed the idea that neutral foreign interlocutors are included in the talks between Macedonia and Bulgaria. Radev made the statement after the honoring of Ss. Cyril and Methodius in Rome, which he attended alongside President Pendarovski.

We have no need of other European countries getting involved, Radev said.

Macedonia has asked that neutral historians, specifically from Germany, join the historic commission that was set up under the 2017 Zaev – Borisov treaty. Bulgarian historians are pushing hard for concessions on issues of national identity and history in the commission, and their Macedonian counterparts initially accepted a number of demands, but as they became more expansive, talks ground to a halt.

Pendarovski responded that the joint honoring of the medieval saints, who are claimed by both countries, is a step toward improving relations. He insisted that Macedonia and Bulgaria must speak as “equal partners” without undercutting each other and with mutual respect. The main accomplishment of the mission to Rome so far, as Pendarovski said, is that Radev has been respectful to him – unlike the previous Bulgarian Government whose officials frequently went on demeaning tirades aimed at Macedonia and officials of the Zaev regime.