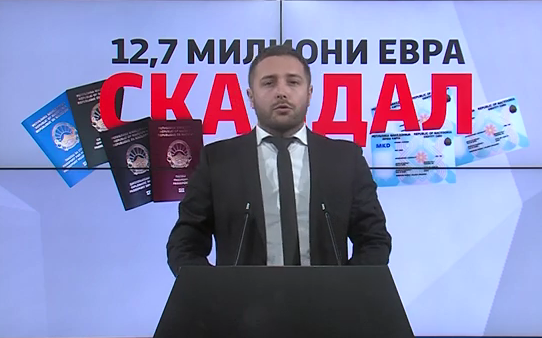 Outgoing SDSM and Zaev from day to day is committing bigger crimes. There is no day without some criminal contract or corruption scandal. Yesterday we had the opportunity in the media to see serious indications of crime by the outgoing government in the MoI through the procurement of passports and personal documents. It is a suspected crime of about 20m euros and corruption of over 12m euros. The entire procedure is suspected of being a crime outside the law, ie it is an unlawful public procurement procedure subject to criminal liability under the Criminal Code of the Republic of Macedonia, VMRO-DPMNE spokesman Dimce Arsovski said at a press conference.

Arosovski noted that SDSM signed a contract with the company “Veridos” for the procurement of passports and personal documents in the period from 01.01.2020 to 31.12.2021, worth 20 million euros, or more precisely 19 million and 600 thousand euros.

According to Arsovski, the whole procedure is suspicious and illegal in the deadlines for public procurement.

The framework agreement amounting to EUR 19,681,666 was concluded on 05/12/2019, and the selection decision and the report on this procurement procedure were concluded and archived on 06/12/2019, ie one day after the agreement was concluded by the Ministry of Interior with the company “Veridos”. According to the logic of the things and according to the laws and procedures in the Republic of Macedonia, first a decision should be made on the choice and then signing contracts and framework agreements on the amount of money, but apparently SDSM was in a hurry to agree on the financial part, and then to comply with the legal procedures to comply, he emphasized.