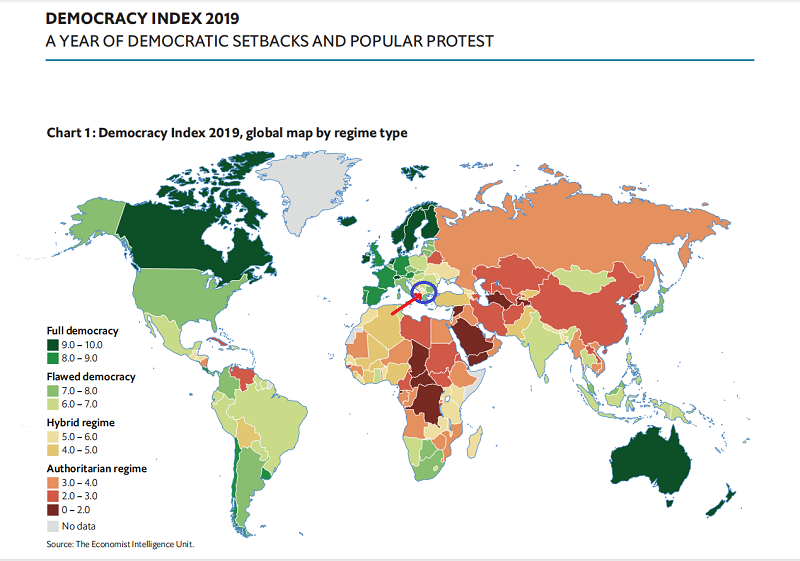 In the year when two Western European countries – France and Portugal – moved from the “flawed democracy” to the “full democracy” category, and one—Malta—moved in the other direction, Macedonia, as a country located in Eastern Europe, is ranked 77th in the world as a “hybrid democracy”. According to the Democracy Index released by The Economist today, Macedonia is only one place better ranked than 2018.

In 2019 eastern Europe’s average score in the Democracy Index remained unchanged at 5.42 compared with 2018. This remains markedly below the region’s score of 5.76 in 2006, when the index was begun.

Improvements in the scores for a few countries, notably Armenia and Ukraine, were offset by falling scores for others, notably Belarus and the Kyrgyz Republic. In total eight countries’ scores rose in 2019, nine fell, and 11 stagnated.

This mixed picture suggests that eastern Europe’s democratic malaise persists amid a weak political culture, difficulties in safeguarding the rule of law, endemic corruption, a rejection by some countries of “liberal” democratic values, and a preference for “strongmen” who bypass political institutions, all of which creates a weak foundation for democracy.

No country moved category in 2019, meaning that there are still no “full democracies” in eastern Europe. There are, however, 12 countries that are classed as “flawed democracies”, including all of the 11 EU member states plus Serbia; and nine that are classed as “hybrid regimes” (the remaining western Balkan states plus Ukraine, Moldova, Armenia, Georgia and the Kyrgyz Republic). The rest are “authoritarian regimes”. 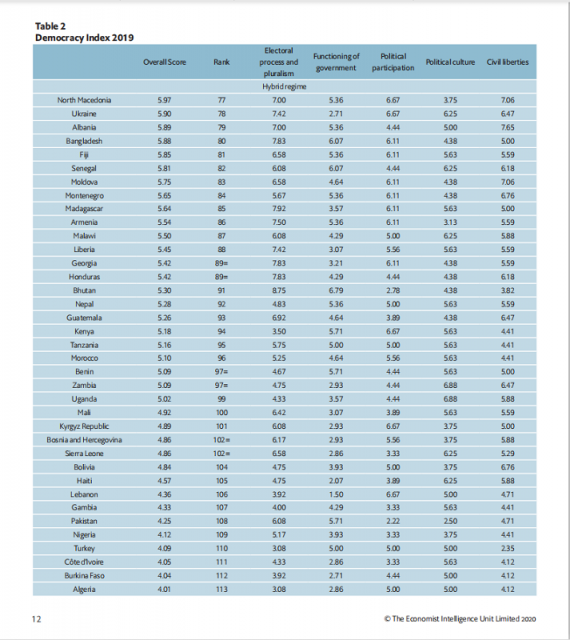 Elections have substantial irregularities that often prevent them from being both free and fair. Government pressure on opposition parties and candidates may be common. Serious weaknesses are more prevalent than in flawed democracies—in political culture, functioning of government and political participation. Corruption tends to be widespread and the rule of law is weak. Civil society is weak. Typically, there is harassment of and pressure on journalists, and the judiciary is not independent.

Western Europe’s average score in the Democracy Index was stable in 2019 compared with 2018, at 8.35, after falling slightly in each of the three previous years. Countries in western Europe occupy seven of the top-ten places in the global democracy rankings, including the top three spots, and the region boasts the largest number of “full democracies” of anywhere in the world, with a total of 15.

There are now five countries in the region that are classed as “flawed democracies”, down from six in 2018.

Other countries to improve their scores in 2019 were Finland, Greece, Ireland, the Netherlands and Spain, but Belgium, Italy and Turkey registered a fall in their scores. Turkey is the only “hybrid regime” in the region.

Elections, influence of foreign power, and capability of the civil service are crucial

The Economist Intelligence Unit’s index of democracy, on a 0 to 10 scale, is based on the ratings for 60 indicators, grouped into five categories:

3. the functioning of government;

Adjustments to the category scores are made if countries do not score a 1 in the following critical areas for democracy: 1. Whether national elections are free and fair. 2. The security of voters. 3. The influence of foreign powers on government. 4. The capability of the civil service to implement policies. If the scores for the first three questions are 0 (or 0.5), one point (0.5 point) is deducted from the index in the relevant category (either the electoral process and pluralism or the functioning of government). If the score for 4 is 0, one point is deducted from the functioning of government category index.

The index values are used to place countries within one of four types of regime:

2. Flawed democracies: scores greater than 6, and less than or equal to 8

3. Hybrid regimes: scores greater than 4, and less than or equal to 6

4. Authoritarian regimes: scores less than or equal to 4