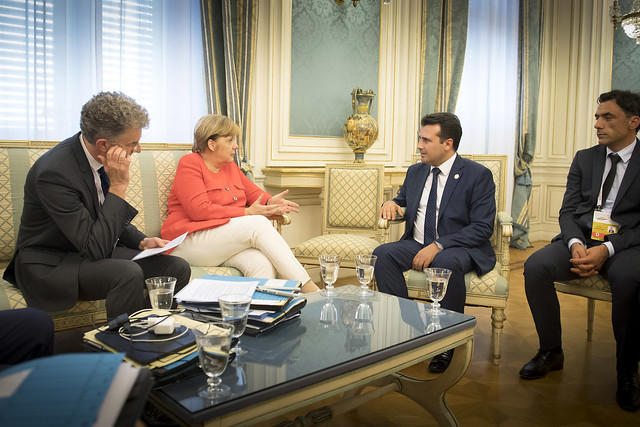 Zoran Zaev concluded his meeting with German Chancellor Angela Merkel this morning, and left without making a statement, but his Government later informed that Merkel promised that Macedonia will open EU accession talks in September.

A statement from Zaev is expected later in the day. The Prime Minister was promising that EU talks will begin in June and threatened to resign unless it happens. Now, his Government insists that the German Chancellor promised that the Bundestag will examine the request and will approve the talks in September.

According to Zaev’s PR service, Merkel said that Macedonia delivered what it was asked to do and that Germany looks on his Government’s work very positively.

Zaev faced opposition from France, the Netherlands and Denmark, and initially hoped that Germany can be counted on to pressure these countries to allow the opening of accession talks. But, after his previous meeting with Merkel, it became apparent that Germany is also delaying the approval, dragging it out through the Bundestag procedures, and Zaev urged Merkel to try and expedite the German Parliament. He also said that Germany is reluctant to allow Macedonia to open accession talks before Albania, because that might spark a nationalist reaction among the Albanians.

The SDSM party is supposed to hold a meeting on Sunday to determine the next steps – whether Zaev will call for early elections or will try to hang on.